This Chinese Tech Giant Just Got a Big-Time Fine, So Why Is Its Stock Skyrocketing? – Nasdaq


Chinese stocks have sold off en masse since the Spring, but is now the time for aggressive investors to go bargain-hunting in the Middle Kingdom?

One indication could be the recent case of Meituan (OTC: MPNGF), the largest food delivery company in China, with businesses in daily deals, hotel bookings, community e-commerce, restaurant software, and grocery and drugstore delivery.

On Oct. 8, China’s State Administration for Market Regulation imposed a $534 million fine on Meituan — a penalty for abusing its dominant market share in food delivery to force restaurants into exclusivity arrangements. Sound familiar? It’s similar to the violation and penalty levied against Alibaba (NYSE: BABA), which was fined $2.8 billion in April for doing the same thing with e-commerce vendors.

Yet how did Meituan’s stock react? The answer may surprise you, and it could mean something good for beaten-down Chinese tech stocks. 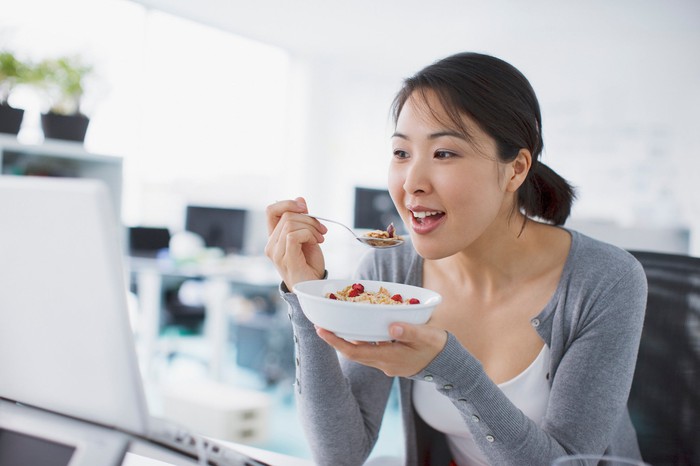 Rising stocks on bad news could signal a bottom

Meituan’s stock counterintuitively rose on the news. That could be because investors were suspecting a bigger fine. The penalty amounted to only 3% of Meituan’s 2020 revenue — a bit lower than the 4% fine for Alibaba.

It could also be a signal that, more broadly, Chinese stocks have been overly discounted on fears of what could happen amid the continued regulatory crackdown. Investors hate uncertainty, and when uncertainty is high, they tend to sell off stocks to the worst-case scenario. So when bad news comes and it’s not the worst that could have happened, stocks can rise despite unfortunate headlines.

That appears to be what’s happening with Meituan now, and perhaps in Chinese tech stocks more broadly. The top five or so internet platforms are up anywhere from 6.5% to 13.5% just this month, after the long, punishing summer. 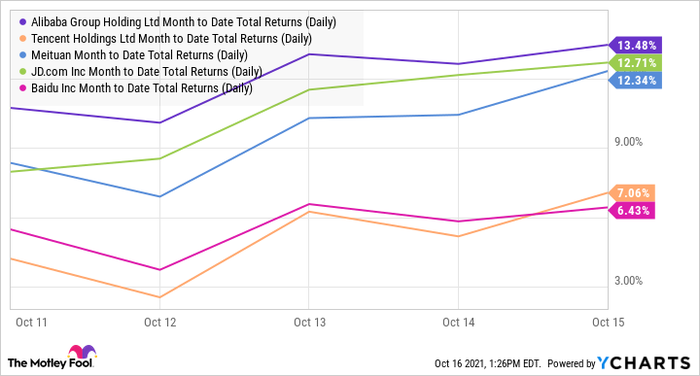 The mere absence of bad news, combined with Meituan’s better-than-expected fine, could be the reason for this strong October performance. News surrounding Charlie Munger’s increased investment in Alibaba over the summer is probably also helping sentiment.

Down from its highs, is Meituan is still a buy?

Meituan is an interesting company right now as China emerges from the pandemic and regulations open up more e-commerce businesses to competition.

Last quarter, Meituan saw strong growth and margin expansion in its food delivery business as well as the in-store and hotel and travel segments. Combined, these two segments made just over 6 billion yuan (roughly $1 billion) in operating income last quarter, while growing more than 90%.

However, Meituan decided to take those profits and invest big time in “new initiatives,” which encompass a slew of other delivery services, food distribution to restaurants, and moped and bike-sharing. While new initiatives saw revenue growth of 113.6% to 12 billion yuan ($1.8 billion), operating losses skyrocketed from 1.5 billion yuan ($233 million) to 9.2 billion yuan ($1.4 billion). Meituan is currently developing its own community e-commerce site, which appears to set it on a collision course with rising e-commerce star Pinduoduo (NASDAQ: PDD) and other large Chinese e-commerce players.

While new antimonopoly rules may harm Meituan’s dominant food delivery business, it may also open up general e-commerce to Meituan’s delivery capabilities against entrenched giants like Alibaba. As traditional e-commerce barriers come down, companies may only be able to differentiate on a narrow set of certain attributes, such as price or delivery. Meituan certainly has the experience in efficient delivery, so that could give it a leg up on rivals as it builds out its new community e-commerce, insta-shopping, and grocery delivery platforms.

Meituan is a rich company with a market cap of $220 billion. Yet even after last week’s rally, the stock is still nearly 40% below its highs. That could mean the stock is worth a look, but investors would need to gain confidence in the potential of Meituan’s various new initiatives.

Is it time to get back into Chinese tech stocks?

With China technology stocks getting a lift in spite of bad news and fines less onerous than feared, it could be a sign that their stocks have bottomed out after many lost as much as half their value this year.

Still, it’s uncertain how much longer the ongoing tech regulatory campaign will go on, and how severe it will be. The 20th Communist Party Congress will be held a year from now, in October 2022. So it’s possible the crackdown could intensify next year as the Communist Party seeks to assert its dominance and control over the economy. On the other hand, it may not be in the interest of China’s leaders to see their biggest companies shedding billions in value when the Congress occurs, either. Perhaps officials have looked to inflict the pain in 2021, so that a 2022 rebound appears stronger.

For investors looking for bargains in an otherwise fully priced market, Chinese internet companies could be worth looking at, provided you acknowledge the risks of this highly uncertain regulatory environment.

10 stocks we like better than Meituan
When our award-winning analyst team has a stock tip, it can pay to listen. After all, the newsletter they have run for over a decade, Motley Fool Stock Advisor, has tripled the market.*

They just revealed what they believe are the ten best stocks for investors to buy right now… and Meituan wasn’t one of them! That’s right — they think these 10 stocks are even better buys.