Three things to watch for in the markets on Tuesday including McDonald's, UPS earnings

Here are the most important things to know about Tuesday before you hit the door.

Fast-food chain McDonald‘s reports third-quarter earnings before the bell on Tuesday. Stephens is forecasting earnings per share of $2.21 on revenue of $5.536 billion. That compares with EPS of $2.05 a share and revenue of $5.34 billion last quarter, results that sent the stock to an all-time high.

Shares of McDonald’s are up 18% this year.

That sizable gain actually lags the broader market and its fast food peers like Chipotle, which also reports earnings on Tuesday, Restaurant Brands, parent company of Burger King and Wendy’s. 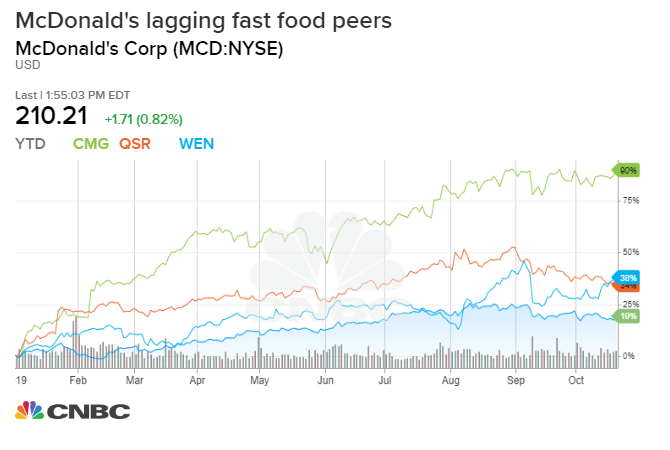 “MCD was noticeably missing from the Chicken Sandwich Wars, which we believe stole some quick service visits from MCD on the margin,” said Stephens analyst Will Slabaugh in a note to clients. The firm said domestic same-store sales will grow 5.2%.

2. Another boost from UPS earnings?

UPS also reports earnings before the bell on Tuesday. The shipping company is coming off of a strong second-quarter earnings report that sent the stock up 9%, as demand for faster shipping drove a jump in revenue. Cowen is expecting earning of $2.03 per share, compared to last quarter’s $1.96 per share.

Volume for NextDay Air increased by more than 30% in the company’s fiscal second quarter. The company’s CEO said UPS is well-positioned to take advantage of the demand for one-day shipping from smaller retailers, a trend that is dominated by e-commerce giant Amazon.

We’ll get September existing home sales and Richmond Fed manufacturing data on Tuesday. Economists are estimating 5.45 million U.S. homes sold in September, according to Dow Jones. This is after U.S. home sales unexpectedly rose to a 17-month high in August, showing that lower mortgage rates are encouraging buyers to take action.

October Richmond Fed manufacturing data is released at 10 a.m. on Tuesday and economists are expecting a read of -6, compared to September’s read of -9, according to FactSet.

Biogen (before the bell)

Lockheed Martin (before the bell)

McDonald’s (before the bell)

NextEra Energy (before the bell)

Novartis (before the bell)

Procter & Gamble (before the bell)

Travelers (before the bell)

UBS (before the bell)

United Tech (before the bell)

UPS (before the bell)

Texas Instruments (after the bell)

Canadian Natl. Railway (after the bell)

Chipotle Mexican Grill (after the bell)

CoStar (after the bell)

Discover Fincl. (after the bell)

Equity Residential (after the bell)

Snap (after the bell)

Whirlpool (after the bell)

— with reporting from CNBC’s Michael Bloom. 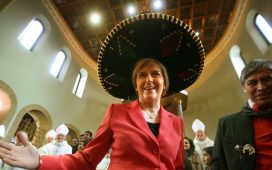