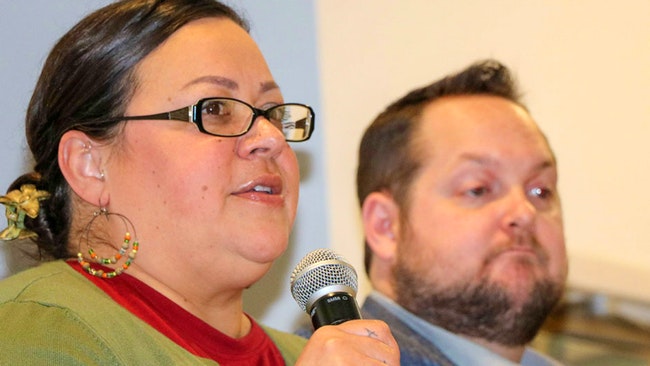 ONTARIO – Ontario is a caring community that wants to help out the local homeless population but just how to distribute that assistance proved to be a key topic at a town hall meeting Wednesday night.

The session, sponsored buy the Malheur Enterprise, was held at Four Rivers Cultural Center and attracted more than 80 people.

The forum featured a panel of four representatives from several local service agencies including Community in Action, a local non-profit dedicated to helping the displaced, Lifeways Behavioral Health, the Oregon Department of Human Services and the city of Ontario.

Each member of the panel delivered their view of the local homeless situation and answered questions from the audience and moderator Les Zaitz, the publisher of the Malheur Enterprise.

“Homelessness is a very complex matter for any community,” Zaitz told the audience at the beginning of the forum.

Echeveste said there are more than 370 homeless people in Ontario, based on a count completed in January and 230 displaced children.

“That is hard to swallow,” said Echeveste.

The lack of housing for the homeless population proved to be a key topic and Echeveste said her organization works to create “partnerships with local landlords” to provide shelter for the displaced.

Liz Johnsen, chief operational officer for Lifeways Behavioral Health, focused on the mental health aspect of homelessness and emphasized partnership within the community will be crucial.

“Each of us has a slice,” said Johnsen. “I am happy to be here and to have this conversation to reduce stigma and barriers.”

Levi Anderson, an employment and training navigator at the Oregon Department of Human Services, said poverty and high housing costs contribute to the homeless situation.

Malheur County, he said, ranks second in the state in child poverty.

The search to find adequate housing for people “can be extensive and doesn’t not happen overnight.”

Adam Brown, Ontario city manager, said the Ontario City Council recently decided a solution to the local homeless situation was an important issue for the city to deal with.

“They’ve essentially taken this issue on,” he said.

Brown pointed out the city, in conjunction with Community in Action and Origins Faith Community Church, spearheaded an effort to place 20 tiny homes on city-owned property to provide housing for the homeless.

“This problem is bigger than any single agency,” he said.

A solution, he said, will “require lots of volunteers.”

Hope for a resolution to the homeless situation is on the horizon said Zaitz.

“This is a caring community but there is hope we can move the needle,” said Zaitz.

While no firm resolutions to the homeless situation developed at the meeting, the session was a success because it raised awareness, said Michael Braden, Ontario city councilor.

“We’ve started taking the steps. This will have to be a grass roots effort of neighbors helping neighbors,” said Braden.

PRESS RELEASE: EUROPE TECH STARTUP TO LAUNCH IN AUSTRALIA – Media Database – Get the Word Out