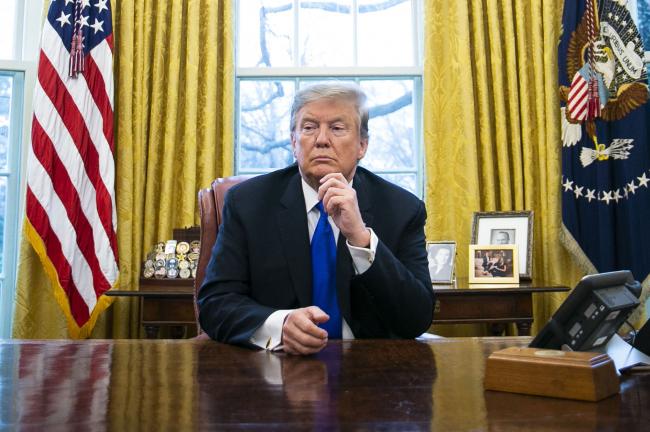 The three chief executives were in Washington for a previously scheduled meeting with Treasury Secretary Steven Mnuchin on banking secrecy and money laundering, according to people familiar with the matter. On a conference call, they briefed the president, who was at his resort in Bedminster, New Jersey.

The talks came during a tumultuous day in markets as Trump’s trade war with China continued to cast a cloud over the global economy. Stocks plummeted as signs appeared in the bond market a recession could be on the horizon.

Moynihan, speaking in a Bloomberg Television interview on Friday, said the turmoil has been driven by issues outside the U.S., and that recession risks are low.

“We have nothing to fear about a recession right now except for the fear of recession,” Moynihan said.

Back-and-forth posturing by Trump and Chinese President Xi Jinping has kept investors on edge amid volatility that’s gripped markets for most of August. China called looming U.S. tariffs a violation of accords, while Trump said Thursday that any deal with Beijing must be “on our terms.”

Spokespeople for JPMorgan, Citigroup and Bank of America declined to comment, as did the Treasury Department.

Disclaimer: Fusion Media would like to remind you that the data contained in this website is not necessarily real-time nor accurate. All CFDs (stocks, indexes, futures) and Forex prices are not provided by exchanges but rather by market makers, and so prices may not be accurate and may differ from the actual market price, meaning prices are indicative and not appropriate for trading purposes. Therefore Fusion Media doesn`t bear any responsibility for any trading losses you might incur as a result of using this data.
READ  Spain rejects latest Swiss bid to extradite HSBC whistleblower

What To Know Before Trading In Cryptocurrency – TheCryptoUpdates