Small shareholders in Flybe have discovered that investing in airlines can be risky. Investors who bought into the regional airline have lost thousands of pounds, after it accepted a 1p per share takeover offer.

The company has struggled with high oil prices, which have been driving up fuel costs.

Rapid expansion left it with empty seats and competition has pushed down ticket prices. 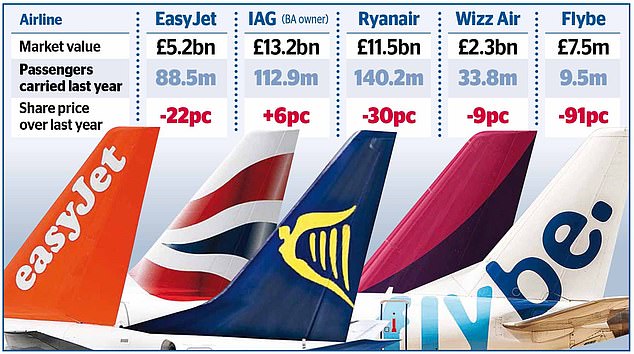 Others such as long-haul low cost carrier Norwegian have also been feeling the strain.

But should Flybe’s struggles be raising red flags for the rest of the airline industry?

Colin McLean, of Edinburgh-based investment firm SVM Asset Management, thinks not, even though shares in most London-listed airlines have tumbled recently. ‘We’ve quite liked the airline sector for at least the last year,’ he says.

McLean likes Ryanair and Hungary-based Wizz Air, both of which offer budget fares, because their operations are focused on Europe and are low cost. Revenues are growing well.

Ryanair, he says, may have hit upon a new way of making money as it has realised it can use the vast reserves of customer data it gains when travellers book tickets through its site.

Information such as passengers’ age, how frequently they travel and where they go could allow it to branch out into car rental and hotel booking. SVM decided to jump aboard airlines early last year when the soaring price of oil was alarming investors and causing shares to slide.

The theory was that higher fuel costs would pile pressure on the weaker airlines, and their rivals would come out the other side even stronger.

The first part of this prediction has certainly come to pass. Monarch, Berlin Air, Germania and Primera Air have all failed over the last 18 months. 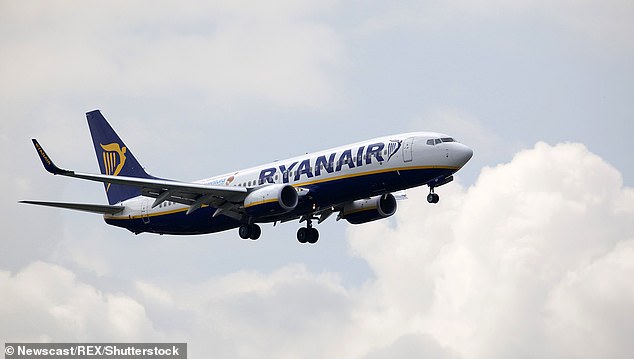 In favour: McLean likes Ryanair and Hungary-based Wizz Air, both of which offer budget fares

Norwegian Air is struggling and Flybe’s market value, following the £2.2million bid from a consortium including Virgin and Stobart Group, is on the floor.

Thomas Cook this week put its airline up for sale after it reported a loss in the last three months of 2018. Even Ryanair issued a profit warning in January after winter fares were lower than expected.

So not everyone is positive on the sector. Analysts at Berenberg are wary of low-cost carriers.

The broker recently downgraded Ryanair to a ‘sell’ rating, saying the Irish airline is facing sustained pressure on prices from its rivals and that its ability to keep reducing costs was ‘highly uncertain’.

EasyJet is on Berenberg’s ‘sell’ list for similar reasons. Although the budget flyer is continuing to take customers from flag-carriers like British Airways and Air France, analyst Adrian Yanoshik thinks it will find it harder to achieve the level of profit the City expects as the year unfolds.

Wizz Air is one exception to his pessimism. It focuses on Eastern Europe, which is a less competitive market, while the customer base in Central and Eastern Europe is better placed to grow faster for longer than in the West.

McLean adds that Wizz Air is also able to lease out its planes to other operators, helping to fill seats and bring in extra cash.

Investors shouldn’t forget about the likes of British Airways’ owner IAG. In Berenberg’s view, these are being viewed through an overly pessimistic lens.

Whilst rapid expansion has left a large number of short-haul airlines vying for the same budget passenges, long-haul airlines have been less aggressive in adding new routes and extra seats on existing routes. It means they don’t have to cut fares so much to fill their seats, making it easier to make a profit.

For individual investors, trying to pick the right airline can be a challenge. One small shareholder, Muhamed Miah, a 34-year-old financial services worker, told the Mail he lost around £85,000 after he invested a chunk of his savings in Flybe last November.

Even though he read the firm’s accounts and recent announcements, he didn’t see any warning signs.

‘It’s not a sector for the nervous,’ says McLean.

He recommends that more cautious savers who are keen on the broader travel sector should consider putting their money in a different type of business, like a hotel firm or booking site. Having said that, he does not think it is time for anyone who owns airline stock to sell up.

For anyone who has the time – and the money – to bear a few tricky years, McLean thinks the budget airlines which have strong balance sheets, such as Ryanair and Wizz, could deliver gains in the future.

What is Income Investing?