The FTSE 100 index plunged 218 points today to its lowest level since July 2016 – and back below the dotcom boom peak – as fears of a trade war stoked turmoil.

London’s leading stock market index dived by 3.15 per cent to close the day at 6,704 – losing all the gains it has made for almost two-and-a-half years.

The Footsie has not traded at these levels since July 2016, and it is now back well below the 6,930 level, which marked the peak of the dotcom boom on 31 December 1999 and it then took 15 years to regain. 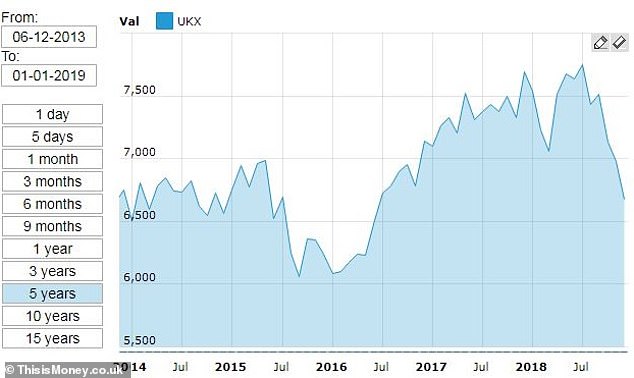 Fresh fears over a global trade war hit the markets this morning, after the arrest in Canada of the chief financial officer of Chinese tech giant Huawei.

Already 2.5 per cent down on the day at lunchtime, the FTSE 100 was dragged further down when US stocks slumped this afternoon.

The main UK stock markets fell today into a sea of red, with the internationally focussed FTSE 100 down by the most

Losses were made all the more painful for investors byt the fact that stock markets had begun this week on the up, after US and China trade fears eased off the back of a seeming thawing of relationships at the G20 meeting.

The chief financial officer of Huawei was arrested in relation to alleged violations of U.S. sanctions.

Investors were fretting that the arrest could drive a wedge between China and the United States just days after President Donald Trump and President Xi Jinping agreed to a temporary truce in their trade war to give the two sides more time for negotiations.

Consumer stocks and miners dominated the Footsie fallers today, as Brexit continues to sap confidence from the domestic market and the sinking oil and metal prices hit the more internationally-focussed firms.

Notable consumer firms falling included Ocado down 8.5 per cent, Sainsbury’s down 7 per cent and ITV down 5 per cent.

Among the miners and natural resources firms Antofagasta fell almost 7 per cent, Bunzl fell 5.25 per cent and Glencore dropped 5.1 per cent.

Crude oil futures fell more than 2 per cent as a deal among OPEC members to cut output at their producer group’s meeting later in the day appeared unlikely.

SpreadEx analyst Connor Campbell put the turmoil down to ‘an intense week for US-China relations’.

‘The post-G20 trade truce is starting to feel like a distant memory, with Tariff Man Donald Trump, and now the arrest of Huawei’s Meng Wanzhou, serving to undermine whatever (naive) hopes of progress had built up on Monday,’ he said.

‘China has, obviously, been quick to criticise the arrest, while Huawei is demanding her release. It is yet another huge blow to what was already looking like a fragile and inchoate ceasefire, and has sent the markets into another value-eroding funk.

Shareholders endured a second day of sell-offs that send the London market well into the red.

Despite a recovery in the London market that took the Footsie to nearly that level in autumn 2007, the financial crisis then caused another crash, taking the FTSE 100 as low as 3,530 in spring 2009.

After another extended recovery, the blue-chip index finally exceeded its pre-dotcom high in spring 2015, when it went on to briefly crest 7,000.

Another major correction then took the Footsie back to just above 5,700 but since then it has hit all-time highs just below 7,900, in May this year. The index is now 14 per cent down from that mark.

Read More   Why has Bitcoin's value plummeted again over the last day?

However, those who bought the FTSE 100 and held onto it through a tracker fund would still have made money, according to Laith Khalaf, senior analyst, at Hargreaves Lansdown.

He said: ‘The FTSE 100 now sits below where it stood at the turn of the century, when the dotcom boom was in full swing and the pressing concern of the day was the millennium bug.

It’s tempting to conclude the stock market has gone sideways, and in one somewhat peculiar sense it has, but even those who invested at the peak of the dot com bubble have still made gains since 1999.

‘That’s because the headline FTSE 100 index ignores dividends paid by UK companies, which are a huge source of the total return payable to investors. The index also fails to take account of medium and smaller companies, which have performed significantly better than the big blue chips since 2000.’