Doctors saved these twin girls’ lives with a highly unusual and risky procedure during their C-section delivery.

The odds were against Jenessa and Genesis when, on their 13-week scan, doctors spotted a teratoma, a benign but fast-growing tumor, on Jenessa’s neck.

It threatened to suffocate Jenessa, and there was a risk Genesis would grow one too.

If they were delivered at term, in March, one or both of them would have been stillborn.

Worse, the pressure the tumor was putting on Jenessa meant that there was a risk she would die as soon as the umbilical cord was cut.

In a bid to save them both, a multi-pronged surgical team at The Chicago Institute for Fetal Health and Ann & Robert H. Lurie Children’s Hospital of Chicago performed a delicate EXIT (ex utero intrapartum treatment) delivery at 29 weeks in December, followed by six months of in-hospital care before they could go home in June. 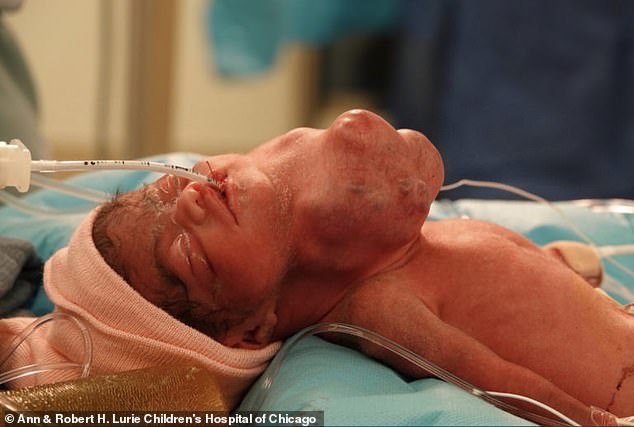 Chicago doctors spotted a teratoma, a benign but fast-growing tumor, on Jenessa’s neck at her 13-week scan. By the time she was born at 29 weeks, it was the size of her head 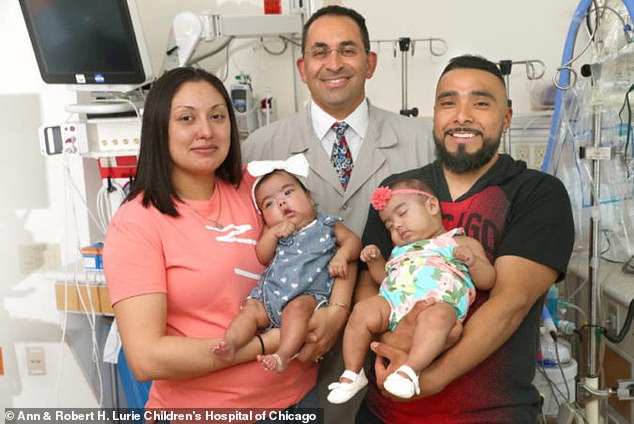 The tumor threatened to suffocate Jenessa (left, with her mom Theodora) in the womb, and there was a risk Genesis (right, with her dad Epimenio) would develop one too

Rather than opening the uterus to deliver the babies, as is standard for a Cesarean, the team first made a smaller incision in the uterus.

It was just enough to access Jenessa’s tiny mouth to insert a breathing tube, and her hand to administer an IV, while Genesis remained stable inside.

Then they proceeded, cutting her umbilical cord and whisking her off for an operation to remove her tumor, which had grown to roughly the same size as her head, while Genesis was delivered.

Their parents, Theodora and Epimenio, from a neighborhood just south of Chicago, were stunned when doctors told them this bleak diagnosis was treatable.

‘It was a scary time, but we were going to go forward and do whatever we had to do to bring my girls into the world,’ said Theodora said, according to the hospital’s blog.

‘I didn’t know this type of surgery was even possible! 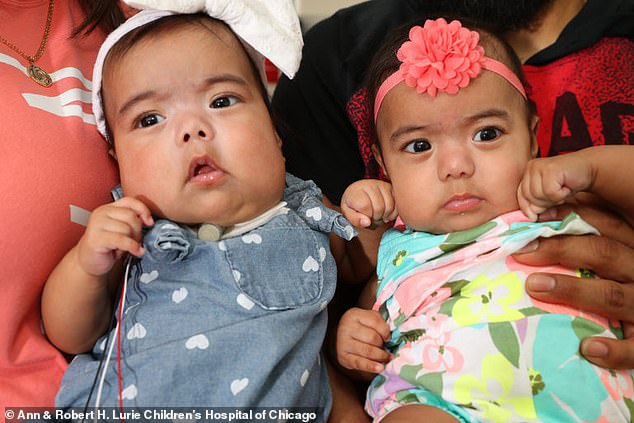 It was a success. Genesis required three months of care in the NICU to build up her strength before she could head home. Jenessa had some set backs, requiring a tracheostomy and a feeding tube to be put in. Finally, in June, she was ready to go home 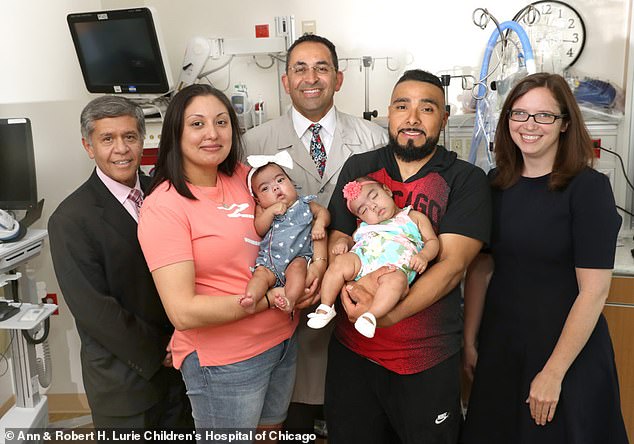 ‘When I finally met with Dr Shaaban and the team, I felt comfortable because they had a plan. Before I came here I wondered what would happen with my girls, but the fetal institute team had their plan, figured out what to do and they made it happen.’

It was a success.

Genesis required three months of care in the NICU to build up her strength before she could head home.

Jenessa had some set backs, requiring a tracheostomy and a feeding tube to be put in.

Finally, in June, she was ready to go home, and doctors predict she will soon be strong enough to have both her trach and gastrotomy removed.

According to Dr Shaaban, the result was the ‘greatest success we could hope for.’

‘I’m so happy for her,’ Dr Shaaban said, referring to Theodora.

‘She told us the most important thing is that she takes home the babies that God gave her. And she has.’