U.S. and China Got Into a Trade War and Mexico Won 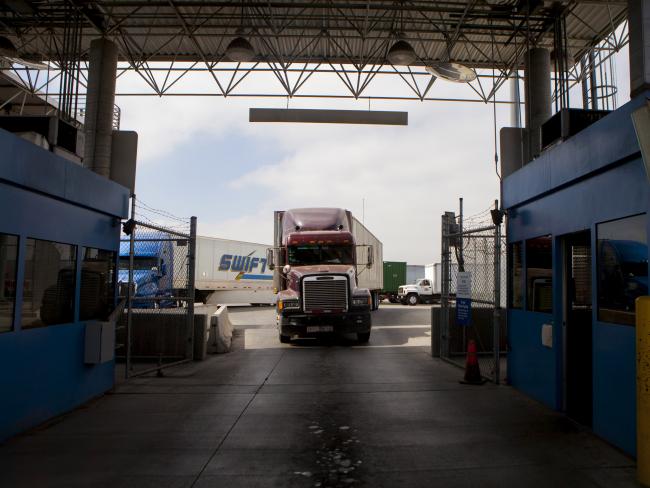 © Bloomberg. Truck drivers wait to speak to a U.S. Customs and Border Protection officer soon after arriving in the U.S. from Mexico at the Otay Mesa Port of Entry cargo facility in San Diego, California. Photographer: Sam Hodgson/Bloomberg

(Bloomberg) — The Trump Administration’s trade war with China has turned out to be a windfall for another country the president frequently berates: Mexico.

Consider Fuling Global Inc., a Chinese maker of plastic utensils that developed a lucrative business making paper cups and straws for U.S. restaurants. But President Trump upended all that with tariffs on $250 billion worth of Chinese imports, including paper products. So the company found an alternative, opening a $4 million factory in Monterrey, Mexico, that will soon begin shipping millions of paper straws across the border.“We had to look for other ways to do business,’” said Fuling Chief Financial Officer Gilbert Lee. The move means the Wenling, China-based company will avoid the tariffs and make up for pricier Mexican labor with lower shipping costs. “Mexico is a very logical and advantageous location for us.”

Fuling isn’t alone. Mexico has seen big gains in shipments to the U.S. in categories where competing Chinese goods were hit with tariffs, everything from poster board to air conditioner parts. In all, U.S. imports of goods from Mexico surged 10 percent to almost $350 billion last year, the fastest growth in seven years. That helped widen America’s trade deficit with Mexico by 15 percent to more than $80 billion. Meanwhile, the growth in shipments from China slowed by about a third.

Mexico’s bonanza underscores the difficulty in trying to win a trade war where companies can shift production or find new sources to avoid tariffs. Despite Trump’s vow to reduce it, the U.S. trade deficit for goods globally hit a record $891 billion last year as tax cuts boosted demand for imports and retaliatory tariffs weighed on American exports. Given Trump’s early attacks on Mexico for taking U.S. jobs, it’s an ironic turn to observers such as factory consultant Alan Russell.

“It’s a case of unintended consequences,” said Russell, chief executive officer of Tecma Group, an El Paso, Texas firm that helps companies open and run factories in Mexico. Interest has never been this high in his 35 years in the industry, he says. “Any company manufacturing in China has had a wake-up call.”

Much of the shift in companies sourcing from Mexico instead of China centers on low value-added items where substitution is easier, according to Jorge Guajardo, a former Mexican ambassador to China. For example, Taskmaster Components has for almost 20 years imported large wheels and tires from China, and assembled them for companies making trailers and recreational vehicles. But tariffs on many of those products pushed the Mount Pleasant, Texas-based company to go hunting for new sourcing. That list now includes Mexico, where it wants to invest in a factory. The U.S. isn’t being considered because Taskmaster hasn’t found a willing partner among the few remaining American manufacturers.

“A lot of people are moving production down there,” said Amanda Walker, the firm’s chief operating officer. The close proximity, access to ports and an educated workforce make “everything about Mexico attractive.”

Mexico’s gain is evident across a diverse span of sectors. After the U.S. levied tariffs on metal ores and their byproducts, Mexico’s exports to America more than doubled, while China’s sank by a quarter. Tariffs on aluminum products helped wipe out almost $500 million in imports from China. Mexico saw a 20 percent increase in sales to the U.S.

The trade war also made the U.S. more reliant on produce from Mexico, which was already the biggest source of vegetables like cauliflower, carrots and onions. In one stark example, peeled garlic cloves from China sank by almost a quarter after receiving tariffs while Mexican exports rose 54 percent.Even small businesses in Mexico benefited. After the U.S. put 10 percent tariffs on silk yarn, one of China’s iconic exports, Mexico’s shipments to the U.S. jumped from basically nothing, just $5,500 in 2017, to $1.6 million last year. China’s imports of knitted and crocheted fabrics fell by about $3 million, almost the exact amount Mexican imports rose.Trump’s tariffs especially targeted the auto supply chain, which had already been expanding in Mexico and has continued to gain under Trump’s policies. One example: U.S. imports of Mexican passenger vehicles with gasoline engines jumped 17 percent to $32.6 billion, while shipments from China, Germany and Canada all declined.

Even before Trump’s presidency, Mexico was becoming more competitive with China, in part due to rising Chinese labor rates and Mexico’s proximity to the U.S., especially important in the e-commerce era of quick shipping.

To be sure, a lot was happening last year other than the tariffs that could have played a part in boosting Mexican exports. Some companies may have upped orders to beat Trump’s threat to dismantle the North American Free Trade Agreement; he instead signed a renegotiated deal in November. Fluctuations in the value of the dollar and Trump’s global steel tariffs might have also played a role.

The Mexico bump could be short-lived if the U.S. and China strike their own trade deal, reducing the impetus to move production to Mexico. Another headwind might be new leftist President Andrés Manuel López Obrador, who has rattled investors’ confidence by canceling a $13 billion airport after it was already one third built and inspiring a more aggressive labor movement, including factory strikes.

But for now, paper-straw maker Fuling Global is all in. It will begin production in Monterrey by July and if all goes well, Fuling will shift more work to Mexico and possibly start selling to the local market and then to South America.

“Changes spur opportunities,” said Lee, Fuling’s CFO. “It’s just a matter of how you deal with it.”

To contact the authors of this story: Matthew Townsend in New York at mtownsend9@bloomberg.netEric Martin in Mexico City at emartin21@bloomberg.net

To contact the editor responsible for this story: Larry Reibstein at lreibstein@bloomberg.net, David GillenAnne Riley Moffat