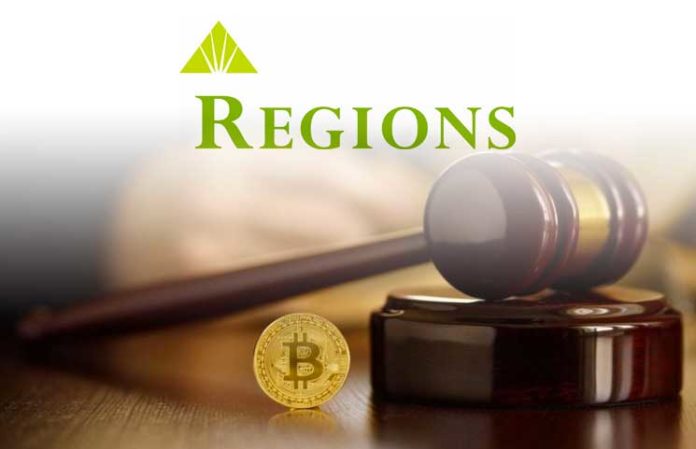 The Regions Financial Corporation bank has decided to ban its clients from buying digital assets. The bank explained that it reserves the right to return or decline to pay for items related to virtual currencies. This is not the first that a bank bans users from dealing with digital assets, and in the future, there may be many others taking similar decisions.

Although virtual currencies and digital assets have been expanding all over the world, there are several banks and financial institutions that are against Bitcoin (BTC) and virtual currencies. The US bank Regions Financial Corporation clarified in its 2018 bank deposit agreement that it could reject purchases of digital assets.

“We reserve the right in our sole and absolute discretion to return or to decline to pay any item presented against your account that we reasonably believe is related to the purchase, sale or exchange of any decentralized, non-fiat virtual currency, cryptocurrency, or any other digital currency or money that relies on distributed ledger…”

There are other financial institutions and banking entities such as JP Morgan, Citigroup and Bank of America, that have decided to take similar decisions involving cryptocurrencies. Discover and Capital One have also taken similar actions against crypto users. Firms feared that users with credit cards would not have the possibility to pay for their debts in case they would lose money.

Users that were using the bank in order to make crypto purchases would now move away from the institution and use another bank account to have access to the cryptocurrency market.

One brave Redditor called WYATTAYARS decided to liquidate his entire bank account and close everything, including his credit card. He has also encouraged the community to take similar measures against other banks that take similar actions.

Banks might be interested in blockchain technology. This is the case of Santander Group or JP Morgan. However, they fear that regulations related to AML and KYC would harm their institutions.

Nonetheless, banks have been involved in different criminal activities in the last years, including money laundering and more.

Dentacoin Trading Down 5.1% This Week (CRYPTO:DCN)