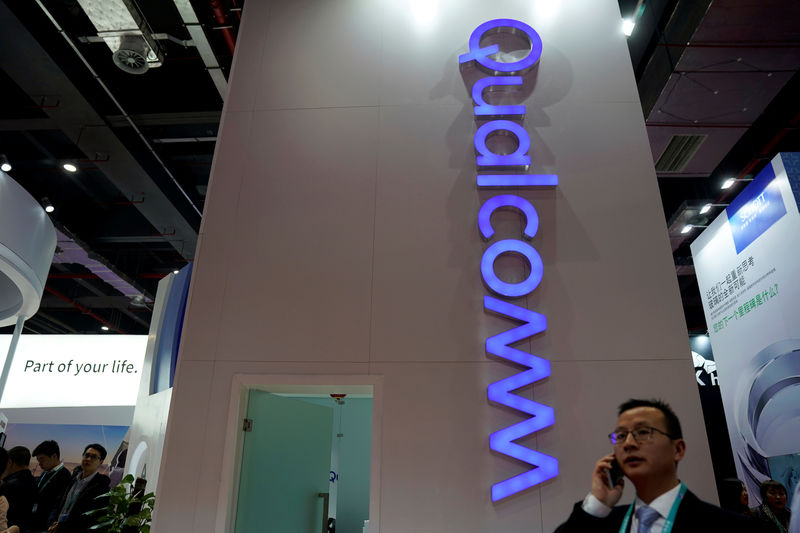 © Reuters. FILE PHOTO: A Qualcomm sign is seen during the China International Import Expo (CIIE), at the National Exhibition and Convention Center in Shanghai,

(Reuters) – A U.S. federal judge has issued a preliminary ruling that Qualcomm (NASDAQ:) Inc owes Apple Inc (NASDAQ:) nearly $1 billion (£754.5 million) in patent royalty rebate payments, though the decision is unlikely to result in Qualcomm writing a check to Apple because of other developments in the dispute.

Judge Gonzalo Curiel of the U.S. District Court for the Southern (NYSE:) District of California on Thursday ruled that Qualcomm, the world’s biggest supplier of mobile phone chips, was obligated to pay nearly $1 billion in rebate payments to Apple, which for years used Qualcomm’s modem chips to connect iPhones to wireless data networks.

The payments were part of a business cooperation agreement between the two companies amid the peculiar patent licensing practices of the consumer electronics industry.

In general, the contract factories that built Apple’s iPhones would pay Qualcomm billions of dollars per year for the use of Qualcomm’s patented technology in iPhones, a cost that Apple would reimburse the contract factories for. Separately, Qualcomm and Apple had a cooperation agreement under which Qualcomm would pay Apple a rebate on the iPhone patent payments if Apple agreed not to attack in court or with regulators.

In a lawsuit filed two years ago, Apple sued Qualcomm, alleging that the chip supplier had broken the cooperation agreement by not paying nearly $1 billion in patent royalty rebates.

Qualcomm in turn alleged that it stopped paying the rebate payments because Apple had broken the agreement by urging other smartphone makers to complain to regulators and making “false and misleading” statements to the Korean Fair Trade Commission, which was investigating Qualcomm over antitrust allegations. Apple responded that it was making lawful responses to regulators in an ongoing investigation.

“Qualcomm’s illegal business practices are harming Apple and the entire industry,” Apple said in a statement.

Don Rosenberg, executive vice president and general counsel of Qualcomm, told Reuters in a statement, “Although the Court today did not view Apple’s conduct as a breach of Apple’s promises to Qualcomm in the 2013 Business Cooperation and Patent Agreement, the exposure of Apple’s role in these events is a welcome development.”

The decision will not become final until after the trial in the case, which begins next month. And it is unlikely that Qualcomm will make a new payment to Apple.

Apple’s contract factories, which under normal circumstances would pay Qualcomm for patent royalties owed on iPhones, have already withheld the nearly $1 billion in payments to Qualcomm. Qualcomm’s Rosenberg said those withheld iPhone payments have already been accounted for in Qualcomm’s existing financial statements.

“Apple has already offset the payment at issue under the agreement against royalties that were owed to Qualcomm,” Qualcomm’s Rosenberg told Reuters.

Disclaimer: Fusion Media would like to remind you that the data contained in this website is not necessarily real-time nor accurate. All CFDs (stocks, indexes, futures) and Forex prices are not provided by exchanges but rather by market makers, and so prices may not be accurate and may differ from the actual market price, meaning prices are indicative and not appropriate for trading purposes. Therefore Fusion Media doesn`t bear any responsibility for any trading losses you might incur as a result of using this data.
READ  Pound hit by Brexit worries; US escalates trade war against China - business live