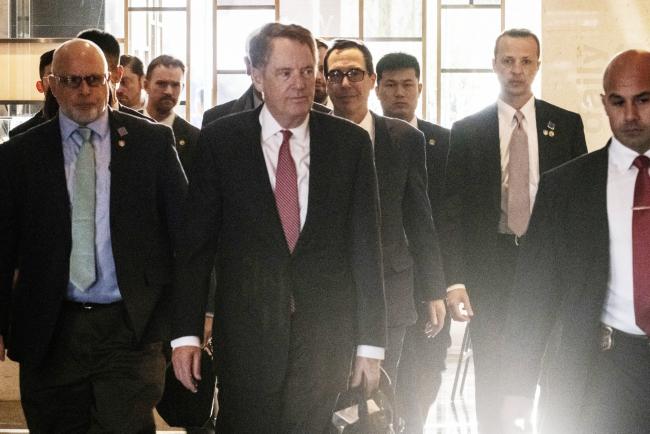 (Bloomberg) — U.S. trade officials including Treasury Secretary Steven Mnuchin and Trade Representative Robert Lighthizer landed in Beijing Thursday for talks aimed at nailing down a deal with China, as an official there warned there are still many issues outstanding.

Arriving at the Westin hotel in Beijing’s Chaoyang district, Mnuchin said he was “pleased” to be there and looked forward to “productive” meetings. Estimates of progress in the talks have veered in recent weeks between expectations of an imminent signing to pushing any finalization months down the line.

“There’s still a lot of work to be done,” Ministry of Commerce Spokesman Gao Feng said at a press conference in Beijing on Thursday. One of the biggest sticking points is still disagreement on enforcement, with the U.S. wanting assurances that China will deliver on any promises to change its practices around intellectual property protection.

The two sides will hold a working dinner Thursday evening with a full day of talks planned for Friday, Gao said. Chinese Vice Premier Liu He is then scheduled to travel to Washington next week.

The urgency of reaching a trade deal is being underscored by the dimming outlook for global commerce. Figures published Monday show trade fell 1.8 percent in the three months through January compared with the previous period. That’s the biggest drop since May 2009.

“China’s sound economic performance is not a result of quantitative easing or massive stimulus,” Li said Thursday in a speech at the Boao Forum for Asia on the Chinese island of Hainan. “Some fluctuations in economic growth from month to month or quarter to quarter are hardly avoidable. Nevertheless we’ll carry on with our policies as long as the major economic indicators are kept within an appropriate range for the whole year.”

The government this month unveiled a record 2 trillion yuan ($297 billion) tax cut and has worked since last year to improve the supply of credit to small businesses and the private sector. While signs of stabilization in the local economy continue to appear, the U.S.-China trade war remains a major source of uncertainty.

Li was upbeat on the domestic outlook, although he sounded a warning on the global economy. Concerns of a downturn are multiplying amid signs that trade is being hammered due to recession fears in Europe and China’s own slowdown.

“Global trade and investment are lackluster, and protectionism is on the rise,” Li said. “The global economy is losing momentum. There are a lot of uncertainties, and market confidence has been impacted.”

Li said that his government was now working to implement a new foreign-investment law passed this month, which seeks to address some of the concerns about access to the Chinese market that have fueled U.S. complaints. China planned to abolish all laws that contradict the new investment code, draft regulations on its implementation by year-end, he said, and work toward treating all companies, Chinese and otherwise, equally.

READ  How to deal with a long-distance relationship? Try this tech

In addition, the government would continue shrinking the list of sectors foreign companies can’t invest in, Li said.

“We’ll only reduce items instead of increasing items” on the negative list, Li said. “We’ll further open up sectors including modern services such as value-added telecom, healthcare, education as well as transportation, infrastructure, energy and resources.

Li also repeated promises that investors from Hong Kong, Taiwan and Macau wouldn’t be adversely affected by the new investment law, comments that drew enthusiastic applause from the audience in Boao.

“We’ll protect and maintain the consistency of the policies regarding Hong Kong, Macau and Taiwan investment,” he said, promising both clear rules and that there would be no change to the favorable polices those firms have enjoyed until now.

“We’ll ensure better protection of the rights of Hong Kong, Macau and Taiwanese companies, and allow them to prosper even more.”

Pull Yourself Up by Bootstraps? Go Ahead, Try It

Boeing asks to give up tax break to avert EU tariffs

Can the coronavirus spread through cash exchanges or live on credit cards?