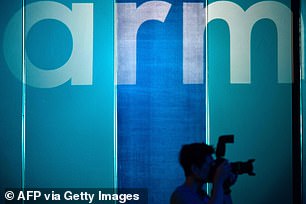 Jobs threat: Cambridge technology company ARM is on course to be sold by its Japanese owner, Softbank, to US giant Nvidia

Ministers say they ‘will not hesitate’ to intervene in the £30billion takeover of British chip maker Arm.

The Cambridge technology company is on course to be sold by its Japanese owner, Softbank, to US giant Nvidia.

But critics warn the deal poses a risk to jobs and could threaten Arm’s global success.

Oliver Dowden, the Culture Secretary, has lead responsibility for the deal in the Government, and holds the power to order an investigation by the Competition and Markets Authority.

He has so far remained silent, but the business department is also thought to be weighing the deal.

Yesterday officials paved the way for a potential intervention. A spokesman said: ‘Arm is an important part of the UK’s tech sector and makes a significant contribution to the UK economy.

‘While acquisitions are primarily a commercial matter for the parties concerned, the Government monitors these closely and when a takeover may have a significant impact on the UK we will not hesitate to investigate further and take appropriate action.’

In an interview with London newspaper City AM, he said the acquisition was a ‘direct threat to our security of supply and sovereignty in the UK and Europe’, and accused ministers of ‘waving the Union Jack while selling off the crown jewels’.

‘We have precious few technology champions,’ Mandelson added. ‘Yet with Arm it seems the Government is prepared to sit and watch as Nvidia potentially rides roughshod over Arm’s business model and its ability to supply the marketplace.’

US tech titans are raking in £2bn a day during coronavirus