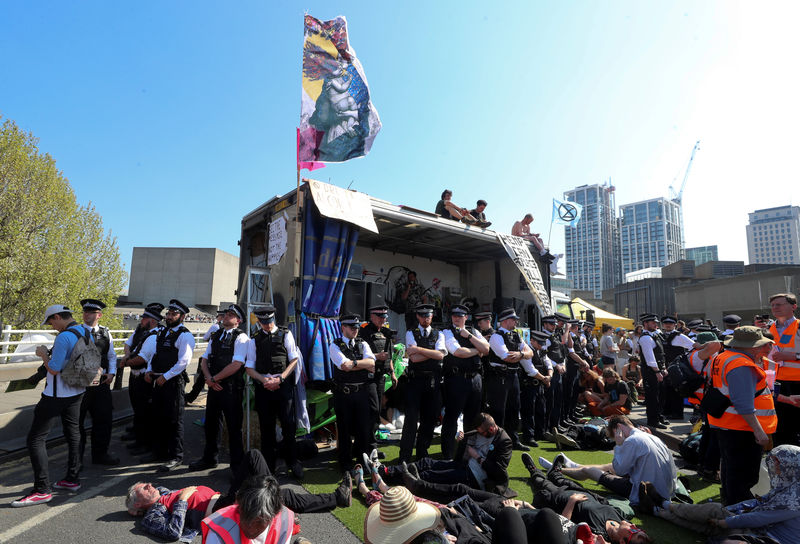 LONDON (Reuters) – More than 700 climate change activists blocking roads at some of London’s most famous landmarks have been arrested over the last six days, police said on Saturday, up from a total given on Friday of more than 682.

The protests, organised by climate group Extinction Rebellion, have for several days disrupted travel through parts of central London, including at Oxford Circus, Marble Arch and Waterloo Bridge.

Extinction Rebellion has called for non-violent civil disobedience to force the British government to reduce net greenhouse gas emissions to zero by 2025 and stop what it calls a global climate crisis.

The police reiterated that protests were only allowed to continue at Marble Arch, but have not said if or how they will clear the hundreds of demonstrators from other locations.

On Friday star Emma Thompson joined activists at Oxford Circus, at the heart of one of the capital’s most popular shopping districts, to read poetry praising Earth’s bounties.

Disclaimer: Fusion Media would like to remind you that the data contained in this website is not necessarily real-time nor accurate. All CFDs (stocks, indexes, futures) and Forex prices are not provided by exchanges but rather by market makers, and so prices may not be accurate and may differ from the actual market price, meaning prices are indicative and not appropriate for trading purposes. Therefore Fusion Media doesn`t bear any responsibility for any trading losses you might incur as a result of using this data.
READ  British cyclist shot dead by hunter in French Alps

EU Says Johnson Will Be Blamed if Brexit Wrecks Trade with U.K.

Will my employee accuse me of discrimination for firing him? Ask HR

How I became Peloton's VP of Fitness Programming: Robin Arzon

We took 3 laundry myths to the cleaners: What's fact and what's fiction?

The 21 best Amazon deals you can get on Monday [Updating]