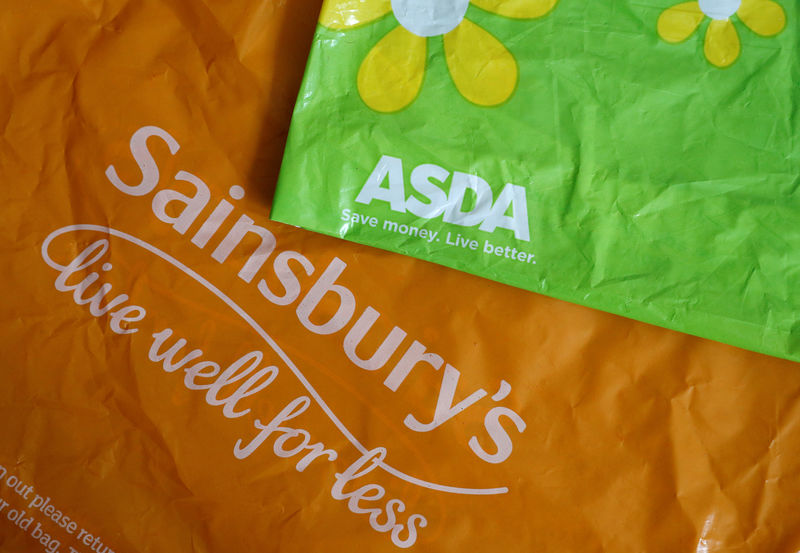 © Reuters. FILE PHOTO: Shopping bags from Asda and Sainsbury’s are seen in Manchester.

The Competition and Markets Authority (CMA) had said in its provisional report in February that the deal, agreed last April, should either be blocked entirely or require the sale of a significant number of stores, or even one of the brands.

The regulator identified 629 areas where there could be a substantial lessening of competition (SLC) in supermarkets, 290 areas where online competition could be reduced and 65 local overlaps in smaller convenience stores.

Sainsbury’s and Asda said last month the CMA’s analysis was “fundamentally flawed” but said they were willing to sell 125-150 stores to get their deal past the regulator – a number well short of what the CMA had said it was looking for.

Given the CMA’s concerns that the combination could lead to higher prices, most analysts and competition lawyers believe it is highly unlikely the deal will proceed.

That expectation has been reflected in Sainsbury’s share price, which has fallen 17 percent over the last three months.

Disclaimer: Fusion Media would like to remind you that the data contained in this website is not necessarily real-time nor accurate. All CFDs (stocks, indexes, futures) and Forex prices are not provided by exchanges but rather by market makers, and so prices may not be accurate and may differ from the actual market price, meaning prices are indicative and not appropriate for trading purposes. Therefore Fusion Media doesn`t bear any responsibility for any trading losses you might incur as a result of using this data.
READ  Markets rally on hopes of Italian budget breakthrough – business live