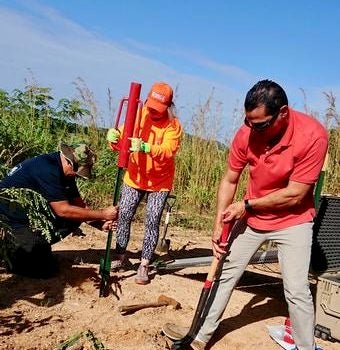 I remember a couple of years ago when my cruise stopped for the afternoon at Grand Turk Island. I was astounded about how much residual damage remained after the recent hurricanes. Piles of rubble sat untended on sides of the road. Homes had collapsed in on themselves. A small pickup was attempting to move debris; it looked like a futile project. Few signs of major infrastructure repairs were happening around us. I remember feeling angry at the government for not pitching in with pride to rebuild what had been a lovely area with amazing coastlines and sea views. We’d respond differently if that were to happen in the US, I felt assured.

Was it way back in October, 2017 when the Climate Justice Alliance (CJA) called for A National Day of Action to demand that Congress pass an immediate federal aid package designed for a just recovery and resilient rebuild of Puerto Rico after Hurricane Maria’s devastation?

The blackout was the longest and largest in US history. The repair efforts of federal and local authorities were ineffective and continued to have infrastructure and social gaps well into 2019.

As we welcomed 2020, the citizens of Puerto Rico were again traumatized — this time by a series of earthquakes, the strongest one a category 6.4 on the Richter scale. In fact, according to the NASA Jet Propulsion Laboratory, days after a 6.4-magnitude earthquake rocked Puerto Rico and hundreds of aftershocks, the full extent of damage is only beginning to be realized.

Yet the Trump Administration continues to withhold funds that Congress appropriated for the island almost a year ago, the Environmental Defense Fund (EDF) argues. The money, under the jurisdiction of the Housing and Urban Development Administration, was intended to support recovery and redevelopment in Puerto Rico in the wake of 2017’s Hurricane Maria.

Given the vulnerabilities of Puerto Rico’s electric grid after Hurricane Maria, the EDF says there is an urgent need to transform its electric grid into a more modern, resilient, and distributed energy system.

“Hurricane Maria taught us that Puerto Rico needs to be prepared to withstand catastrophic events by having an electric system that can support its residents and their needs. These recent earthquakes are proof that much remains to be done. Local leaders must take action now to improve the rules that ensure reliable, affordable electricity, and build resiliency in Puerto Rico’s communities.

FEMA’s presence in Puerto Rico at the moment is only a temporary measure. The real difference in building resilient communities and providing a long-term solution to the island’s energy crisis needs to come from federal funds that have yet to be released. It’s dirty politics to withhold money intended to protect people’s lives in a time of crisis; the Trump administration should release these resilience funds immediately.”

Even before Saturday’s major aftershock, which fissured more roads and prompted more landslides, The New York Times reports that Puerto Rico estimated damages from the earthquake at $110 million. Gov. Wanda Vázquez asked the federal government on Saturday to approve a major disaster declaration, which would clear the way for additional federal assistance, including funds for temporary housing.

READ  Even In Exile, Jamal Khashoggi Was Reluctant To Sever Ties With Saudi Arabia - NDTV News

The Trump administration approved an initial emergency declaration last week. CNN notes that the president hasn’t spoken or tweeted about the disaster that took place on the US territory, adding that he often publicly comments on natural disasters in the US and abroad and that “Trump has had a fraught history with the US territory since Puerto Rico was devastated by Hurricane Maria in 2017.”

How to Rebuild Grid for Puerto Rico? Microgrids!

The EDF is developing an innovative project to demonstrate the feasibility of incorporating distributed energy resources, through systems such as microgrids, into the system. These mini-energy service stations fuel up on solar power and run backed by battery storage and intelligent software, while reducing reliance on fossil fuels. Linked to the larger grid — ensuring the delivery of affordable, clean and reliable energy every day — these systems can be designed to also separate from the grid during emergencies to keep the lights on in remote parts of the island.

Microgrids already are seeing success in Puerto Rico’s most remote regions. Even with extended regions of Puerto Rico without electricity as a result of this week’s earthquake, the Rocky Mountain Institute (RMI) reveals that microgrids in 10 schools are up and running.

The solar plus storage microgrids were recently installed by RMI, Save the Children, and Kinesis Foundation. These microgrids offer sufficient battery and solar capacity to back up school libraries, administrative offices, kitchens, and critical water pumps indefinitely in the event of an outage.

“The grid is down but the systems are working,” said Roy Torbert, principal at RMI Islands Energy Program. “I think what you can learn from the microgrids and the way they’ve performed is that so much of community resilience is happening from the bottom up.” The school microgrids were built in response to Hurricane Maria, which destroyed the island’s electric grid in September 2017, leaving some without power for more than a year.

Last summer Puerto Rico Electric Power Authority (PREPA) published a plan from Siemens Power Technologies International that made recommendations for the utility’s energy supply resources over a 20-year span. The plan called for modernizing the transmission and distribution grid, and creating electrical islands called MiniGrids that function like “zones of resiliency.”

A report by Wood Mackenzie estimates that the accumulated investments in Puerto Rico’s microgrid market, which could allow over 220 megawatts of installed capacity in the next 5 years, will reach $419 million. Companies are currently competing for the development of multiple clean energy and microgrid projects on the island.

These trends indicate that the capacity for energy generation from microgrids could double by 2024.

Carolyn Fortuna Carolyn Fortuna, Ph.D. is a writer, researcher, and educator with a lifelong dedication to ecojustice. She’s won awards from the Anti-Defamation League, The International Literacy Association, and The Leavy Foundation.
As part of her portfolio divestment, she purchased 5 shares of Tesla stock.
Please follow her on Twitter and Facebook.

Congestion charge on both sides of the Severn bridges being considered

Apple’s stock rout starts and ends with the iPhone