A rampaging driver in a stolen vehicle tore through San Francisco on Wednesday afternoon, hitting two pedestrians and several vehicles at five different sites before police arrested her in the city’s South of Market neighborhood, officials said.

Officers captured the driver, who was not immediately identified, after she slammed a silver Kia sport utility vehicle into another vehicle around 3 p.m. on Sixth Street near Clara Street in the city’s South of Market neighborhood, police said.

The spree began when police ran the license plate at 1:56 p.m. near Eddy and Taylor streets and found the SUV was stolen, said Sgt. Michael Andraychak, a police spokesman.

When officers tried to pull her over, the woman drove onto a sidewalk and smashed into a pedestrian, pinning him against scaffolding in front of the Tenderloin police station, Andraychak said.

To view the San Francisco police video that shows some of the incident go to: http://bit.ly/sf-crash

Video from the police station shows a dramatic scene as more than a dozen officers on foot swarm the vehicle after it strikes a pedestrian. The Kia then repeatedly smashes into parked cars — while reversing and accelerating forward — finally breaking away from the scene and peeling off.

“This is a very densely populated area. It’s very scary, what I saw,” said Andraychak, referring to surveillance footage capturing the start of the pursuit. “It’s very, very dangerous what this person was doing … and right at about 2 o’clock, just as schools are letting out.”

Several parked cars were struck at that first crash scene, including an unmarked police vehicle.

Responding police officers “were very much in danger,” Andraychak said. “They had to move out of the way” of the Kia.

This is footage from outside @SFPDTenderloin earlier this afternoon. Officers are attempting to stop a suspect in a stolen vehicle, which was used in multiple hit and runs and caused aggravated assaults. The suspect has been taken into custody.https://t.co/y6BplaFobB

As officers chased the Kia on foot, the driver struck a second pedestrian at Eddy and Taylor streets, Andraychak said.

As paramedics treated the injured victims, the driver fled south on Taylor with police in pursuit, officials said. Minutes later, the Kia struck two vehicles at Fifth and Market streets.

Witnesses described seeing the Kia speeding through the intersection before crashing into a dark-colored Nissan sedan.

Lauren Sorensen, 43, was about to cross the street when the crash happened.

“We were all about to cross,” Sorensen said. “The crowd of people waiting was two to three people deep. We’re so lucky.”

After the crash, the Kia driver banged the steering wheel with her hands, put the car in reverse, then sped off with police vehicles in pursuit, witnesses told The Chronicle.

As the woman continued into the city’s South of Market neighborhood, she veered the wrong way down Clara Street, striking a vehicle at Fifth Street before coming out of the alley onto Sixth Street, where she crashed a final time and came to a stop, police said.

Officers “following the path of destruction” caught up to the driver and placed her under arrest, Andraychak said. She was identified only as an adult female and was taken to a hospital. It’s unclear whether the woman was under the influence of drugs or alcohol, police said. 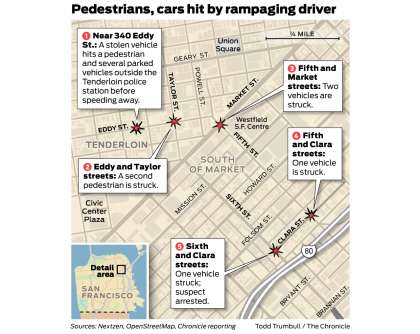 Both pedestrians who were hit were taken to the hospital.

The first pedestrian is a worker for the Tenderloin Community Benefit District, a nonprofit that works to improve the neighborhood. The worker was doing graffiti removal when he was struck, said Fernando Pujals, a district spokesman.

The worker was taken to the hospital and released “in good spirits,” Pujals said.

“For anyone to almost lose their life because they’re out there cleaning the sidewalk — no one should have to go through that. But it could have been worse, and for someone else it was worse,” Pujals said.

The second pedestrian who was struck sustained life-threatening injuries, Andraychak said. No information about that victim was available Wednesday night.

The other drivers whose cars were hit complained of injuries but were not taken to hospitals, police said. No shots were fired in the episode, but Andraychak said one officer pulled out a firearm as the suspect was arrested.

Andraychak said officers haven’t said what prompted them to initially run the stolen vehicle’s license plates, but said “that’s something we do all the time as police officers.”

“You see a car, it’s something you do on a regular basis, sometimes you have a reason, sometimes you don’t,” he said. “I haven’t had a chance to talk to those officers to determine exactly what about that car made them want to run the license plate. But they did, and it came back stolen.”

OPINION EXCHANGE | It’s not about electric vs. gas. We need to turn away from cars. – Minneapolis Star Tribune

This tiny electric car looks like a washing machine and costs just $6,600 – CNN

Lotus takes its world-beater on tour – The Independent