Visa’s chief executive called Amazon’s decision to ban UK-issued credit cards from its platform “odd” and “unfortunate,” but said he expects the spat to be resolved through negotiation.

“Clearly, we’re in a challenging negotiation,” Al Kelly told the Financial Times. “What’s different here is that Amazon unfortunately decided to take the negotiation challenges that we’re having public and oddly has chosen to threaten to punish consumers.”

Amazon on Wednesday notified customers it would stop accepting UK-issued Visa credit cards starting next year and offered affected customers £20 off their next purchase using an alternative payment method. The retailer also said it was weighing dropping Visa as the partner for its co-branded card in the US.

“This should not be considered a shock, as Amazon has been using every negotiating tactic available to bring down the cost of processing payments,” Autonomous analyst Kenneth Suchoski wrote in a note that said Amazon’s move would have little impact on Visa’s bottom line. 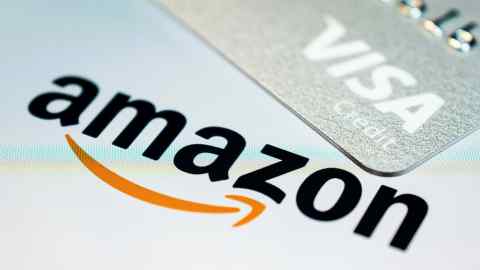 Amazon told UK customers it was acting because of Visa’s high fees. However, Mastercard and Visa set nearly identical transactions fees in the UK, according to payments firm Bambora.

“I find it quite odd that they’re claiming they did this because of the high cost of acceptance of these in the UK,” Kelly said. “It’s just absolutely inaccurate.”

Visa and Mastercard announced increases to the interchange rates applicable to payments between the UK and the EU after Brexit was formalised this year. For digital payments where a physical card is not present, the fees were raised to 1.15 per cent for debit transactions and 1.5 per cent for credit transactions from 0.2 per cent and 0.3 per cent, respectively.

A person familiar with Amazon’s position said the interchange fees were just one sticking point of several involving Visa. The person said rising costs were a concern before Brexit, and executives felt the payment provider was “not adding much value”.

Before Visa’s interchange fee increase in October, Amazon had moved to limit its use in markets including Singapore, where a 0.5 per cent surcharge for Visa credit transactions was introduced this year, and Australia. In both countries, vouchers were offered to customers who switched to different forms of payment.

Amazon considers it unreasonable for Visa to levy additional fees to guard against fraud in online sales, given the retailer’s reams of data and insight into consumers. “Amazon invests heavily to protect our customers from fraud and abuse,” a spokesperson said. “Yet Visa’s pricing remains high, while merchants remain responsible for fraud.”

The showdown with Amazon is the latest problem for Visa as it contends with mounting threats to its core business of routing payments.

“These are not the most happy days for Visa,” said Mizuho analyst Dan Dolev. “They’re getting attacked on multiple fronts.”

Visa and Mastercard have held an effective duopoly on global payments for decades because of the popularity of cards as a payment method. However, fintech competition and geopolitical pressures are threatening to weaken their influence.

Amazon’s move against Visa is only the latest example of merchants seeking to lower interchange fees. They cite studies showing the cost of processing transactions has fallen sharply but the fees they are charged have stayed the same. Payment networks and issuers enjoy profit margins of 30 to 50 per cent while retail margins are about 3 per cent, according to consultancy CMSPI.

Although the card companies set interchange fees, they point out that they do not receive most of the money collected. “At Visa, we have the responsibility in the markets where pricing is unregulated to set price, and nobody’s ever happy with us,” Kelly said. “If price comes down, financial institutions aren’t happy, the price goes up merchants aren’t happy.”

Merchants have railed against transaction fees for decades, but they are gaining leverage in negotiations because of the proliferation of alternative payment methods.

Financial services companies like PayPal have been building their own payment systems that do not rely on the established networks. Last month, Citigroup launched a programme allowing retailers to go through the bank to request payments from consumers directly, bypassing the card system.

Many of those payments are enabled through application programming Interfaces, or APIs, like Plaid, which facilitate secure connections to consumer financial data for third parties.

“It’s clear that the future is API-based connections, using bank accounts as a routing hub as opposed to using credit cards,” said Keith Grose, head of international at fintech Plaid.

Concerns over the future of its debit business led Visa to make a $5.3bn bid for Plaid last year, but the deal was dropped after the US justice department objected on antitrust grounds. Visa and Mastercard also have started building their own API networks and investing in open banking technology.

Amazon has been experimenting with alternative payment methods bypassing cards. In August, the company said it would offer BNPL facilities to US shoppers through third-party provider Affirm, allowing purchases of $50 or more to paid in instalments.

A similar option was set up in Germany with Barclaycard, while in Poland and the Netherlands the company has worked with several companies to offer direct bank transfers to pay for goods.

In addition to pushback from merchants, there is also pressure on transaction fees from governments around the world.

The UK Payment Systems Regulator said this month it was examining the issue of interchange fees and would “intervene to address any issues we identify”.

The US Federal Reserve has said it would revisit interchange regulations to address developments in payment technology, and analysts expect new rules to be issued next year.

The duopoly also faces competition from domestic payment networks in China, India, Australia, Germany and Russia — which are being bolstered by governments to keep costs down and boost national security, said James Booth, head of partnerships at fintech group PPRO.

Meanwhile, efforts are under way to build a European Payments Initiative, which faces significant hurdles.

“There’s lots of alternative methods of payment but because of the way the wider payments market is set up, there are a number of conflicts that mean new and existing alternatives struggle to compete with cards,” said Alex Ellwood, senior vice-president at CMSPI. “Card payments feeds a number of stakeholders with fee revenues.”