Wall Street charted a recovery on Friday after closing September with the worst monthly performance since the coronavirus-induced rout of March 2020.

The S&P 500 rose 1.2 per cent on Friday, although the gain was not enough to recoup losses on Tuesday and Thursday that left the blue-chip index down 2.2 per cent for the week.

The benchmark fell almost 5 per cent last month, pushed lower by concerns about slowing economic growth and persistent inflation, at the same time policymakers signal they are ready to tighten policy. Surging energy prices and risks of a slowdown in China’s industrial and property sectors helped to propel the marketwide weakness.

But data on Friday showed stronger-than-expected consumer spending in the US in August, helping to allay some concerns around the slowing expansion. Shares of economically sensitive industries jumped following the report, with the Dow Jones Transportation Average up 1.8 per cent and the Russell 2000 index of small-cap stocks rising 1.7 per cent.

Both indices have started to outpace the benchmark S&P 500 in the wake of the Federal Reserve’s September meeting, as investors adjust their interest rate expectations and begin to pencil in the prospect that the Fed could tighten policy faster than previously thought.

While the yield on the 10-year US Treasury note fell 0.02 percentage points to 1.46 per cent on Friday, it remains up from about 1.3 per cent just over a week ago.

And figures published late on Friday showed that asset managers had increased their short bets on the 10-year Treasury, signalling that they expected the hawkish tilt from the Fed to weigh on the notes.

Fed chair Jay Powell has signalled that the US central bank will soon announce reductions of its $120bn of monthly bond purchases, a programme that helped to spur lending throughout the pandemic and lifted stock and bond prices.

“The idea of a tighter monetary environment going forward is what is driving equities at the moment,” said Nitesh Shah, research director at exchange traded funds provider WisdomTree.

The technology-focused Nasdaq Composite index, which lost 5.3 per cent last month, ended the week up a narrower 0.8 per cent.

Europe’s regional Stoxx 600 index, which rallied to a record in early September before losing 3.4 per cent over the month, closed 0.4 per cent lower while London’s FTSE 100 dropped 0.8 per cent.

Supply chain bottlenecks and a natural gas shortage sent consumer price inflation in the eurozone to its highest level for 13 years in September, data on Friday showed. 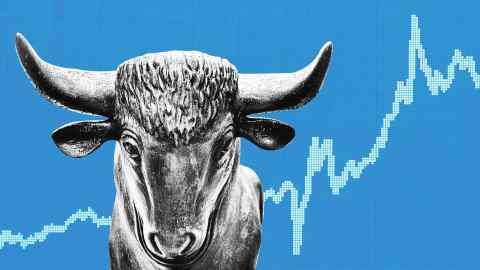 Separate US data showed that core personal consumption expenditure — the Federal Reserve’s preferred inflation measure, which strips out food and energy costs — rose 3.6 per cent in August from a year earlier, matching levels from June and July.

“There’s a view out there that the psychology of inflation has taken hold, people are talking about it on the street, they are feeling it and once inflation takes hold it is off to the races with it,” said John O’Toole, head of multi-asset fund solutions at Amundi.

Stock market sentiment had weakened earlier in the week because of developments in China, where the potential collapse of the debt-laden homebuilder Evergrande has highlighted stresses in the economically important property sector. The Beijing government is also scrambling to secure energy supplies, intensifying fears of higher prices for the rest of the world.

Brent crude, the international oil benchmark, rose 1.2 per cent on Friday to settle at $79.28 a barrel. The commodity has rallied more than 50 per cent for the year so far.

The dollar index, which tracks the US currency against six others including the euro and sterling, fell 0.2 per cent after hitting a one-year high on Thursday.