Homebuilders were the best-performing stocks outside of commodities ETFs this week.

Driving the gains were two big indicators of housing demand.

Existing home sales for June soared 20.7% to an annual rate of 4.7M. That was the biggest monthly rise on record. New home sales jumped 13.8%, blowing past economists’ estimates of 4%.

The sector is showing resilience in a very different environment from the one that cratered homebuilding in the financial crisis.

“In terms of the underwriting standards that support this market, the low interest rates that are going to spur new interest into the market and the soaring high prices, as well as the lack of inventory; all of that leads to a stability in home price appreciation this year,” Neela Richardson, investment strategist at Edward Jones says.

“Housing has basically done well in every part of the country,” Richardson adds. “This is the response to a national epidemic where the value of being in a home has been amplified because we’re spending so much time at home.”

Casino stocks, which have been a bellwether for the economic recovery, may be diverging from that if you look the assessment from Las Vegas Sands (NYSE:LVS).

The VanEck Vectors Gaming ETF (NASDAQ:BJK) is off 4.2% this week.

“I don’t want to predict 2021 because I don’t feel I have enough insight into what might happen to the vaccine or the virus and no way to forecast that,” CEO and casino magnate Sheldon Adelson says. “But I would be less than honest if I didn’t tell you that Las Vegas is in a very difficult place. Unlike Macao, where there’s a real, real strong desire and belief that we’ll see things return much quicker … Vegas is dependent on airlift, it’s dependent on group and convention. It’s not a casino-driven market anymore. So we’re struggling here.”

“So in all the years as I’ve been here in Las Vegas, I’ve never felt more gloomier … about what’s happening in Las Vegas short term. Hope long term, we can see a better day.”

The St. Louis Fed’s Financial Stress Index dipped below the baseline for the week ended July 17.

“The STLFSI2 measures the degree of financial stress in the markets and is constructed from 18 weekly data series, all of which are weekly averages of daily data series: seven interest rates, six yield spreads, and five other indicators.” 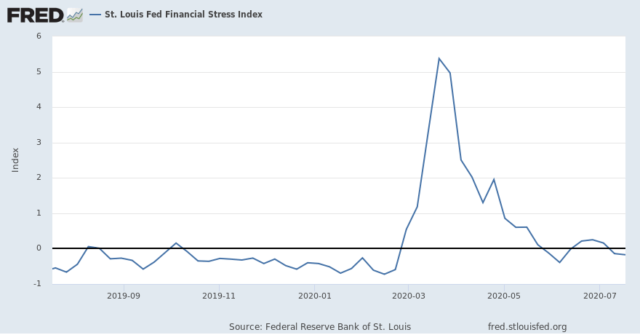