What Is Nasdaq and How Is It Different From the Dow? – TheStreet.com


The Dow Jones Industrial Average and the S&P 500 may have taken a beating in the weeks leading up to the start of 2019, with the Dow dropping over 600 points on Christmas Eve, the S&P 500 plunging more than 2.7% and the Nasdaq following suit with around a 2.2% drop. And although the indexes seem to have climbed higher last week in response to the December U.S. jobs report and recent Federal Reserve comments, the markets are anything but stable. And as a long-standing staple of the market, the Nasdaq Stock Market holds some of the most market-moving stocks out there.

While the New York Stock Exchange (NYSE) claims the title of the largest exchange in the world with a market cap of over $22 trillion as of 2019, the Nasdaq (which stands for “National Association of Securities Dealers Automated Quotations”) comes in second, with a cap of over $10 trillion as of 2019 — and brags some of the biggest stocks on the market.

But what is the Nasdaq and what companies trade on it?

However, apart from being an exchange, the term “Nasdaq” also often refers to two key indexes — the Nasdaq Composite Index and the Nasdaq-100 — which are generally considered the authority on how the tech industry is doing on the stock market.

The Nasdaq Stock Market was created by the National Association of Security Dealers (NASD) to enable investors to quickly and electronically trade securities over a computerized system. The Nasdaq’s first trading day was Feb. 8, 1971. The main indexes that track the Nasdaq’s performance are the Nasdaq Composite and the Nasdaq-100, although several smaller indexes track different parts of the market’s performance as well.

The Nasdaq was created by the NASD when the association decided to build the first all-electronic stock exchange in 1971. Initially, the Nasdaq didn’t actually facilitate trades, but rather gave automated quotations.

However, after a few years, the Nasdaq began executing OTC (over-the-counter) trading. The exchange then drew in growth companies like Oracle   (ORCL)  , Dell (DELL) and other companies that eventually expanded into today’s tech giants.

The Nasdaq has long also been an industry leader in innovation. For example, the Nasdaq boasts being the first market to trade all-electronically (as opposed to the NYSE’s human floor traders).

lt was also the first to create the modern initial public offering (IPO), according to Nasdaq. The Nasdaq also created the Nasdaq-100 index in 1985, and in 1996, the Nasdaq site, www.Nasdaq.com, went live — the first financial-exchange Web site. More recently, the Nasdaq was the first to use the cloud to store data, as well as the first to sell its technology to other exchanges.

However, in 1987, Nasdaq officially separated from NASD. The Nasdaq also merged with the American Stock Exchange in 1998 to create the Nasdaq-AMEX Market Group, although the AMEX is now part of the NYSE.

In 2000, the NASD agreed to spin the Nasdaq off into Nasdaq Stock Market, Inc.,  a publicly traded for-profit company. (The company is now known as just Nasdaq Inc. (NDAQ) .)

The next year, the Nasdaq purchased the European Association of Securities Dealers Automatic Quotation System (EASDAQ) — the European “Nasdaq” — and turned it into “Nasdaq Europe.” And although that exchange shut down in wake of the dot-com bubble’s burst, operations resumed in 2007 under the name Equiduct (currently Börse Berlin).

The Nasdaq then bought out Nordic-based company OMX and changed that company’s name to Nasdaq OMX Group in 2007. The Nasdaq also purchased the Boston and Philadelphia Stock Exchanges the following year, and in 2009, the company created the first mobile Web version of Nasdaq.com.

Nasdaq OMX was a founding member of the United Nations Sustainable Stock Exchanges initiative (prefacing the United Nations Conference on Sustainable Development) on June 18, 2012. In 2013, the Nasdaq also set itself up as a leading company-solutions provider by acquiring Thomson Reuters’ investor-relations, public-relations and multimedia-solutions businesses. And in 2015, the Nasdaq expanded its equities market to Canada by acquiring Chi-X Canada. Then the company acquired the International Securities Exchange (ISE) in 2016 to strengthen its options platform.

That same year, Adena Friedman was promoted to head up the Nasdaq, becoming the first female CEO of a big U.S. securities exchange. In addition, the Nasdaq announced the creation in 2017 of Nasdaq Ventures, which invests in and develops fintech companies.

Of the 3,400 or so companies traded on Nasdaq, the exchange is well-known for tech stocks and mega-companies like Comcast (CMCSA) , Ebay Inc. (EBAY) , Netflix (NFLX) , Qualcomm Inc. (QCOM) and many, many more. 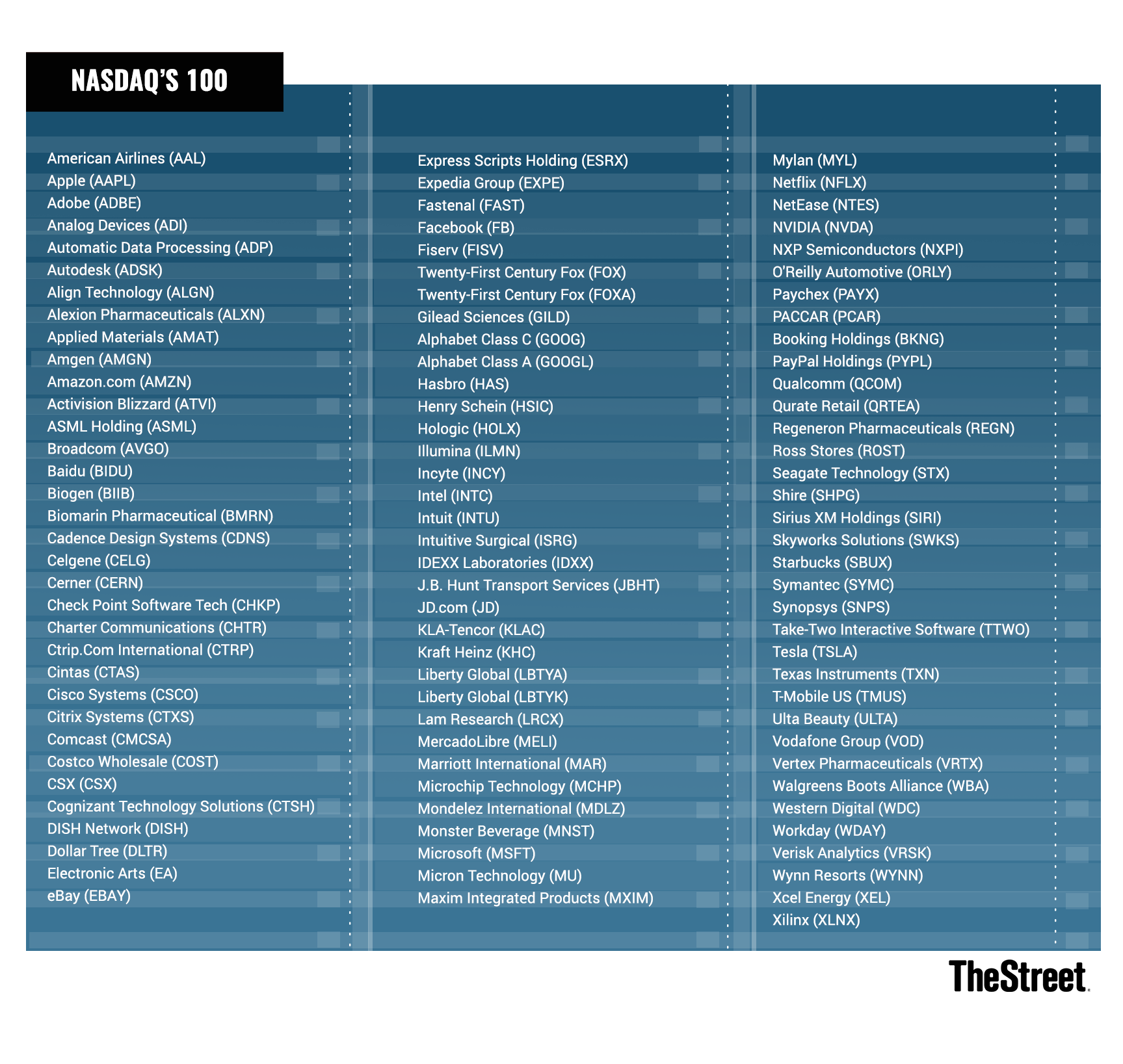 So, what indexes track the Nasdaq?

What are the differences between Nasdaq Composite and an index like the Dow Jones Industrial Average (or the Dow)?

Well, first of all, the Dow is a “price-weighted index,” meaning it weighs stock prices differently using a special divisor called the “Dow Divisor.” But unlike the Dow, the Nasdaq Composite is a “market capitalization-weighted” index, whose divisor changes with changes to the index.

The Dow also represents strictly large-cap companies like Coca-Cola (KO) and Pfizer (PFE) , whereas the Nasdaq Composite follows a mix of large- and smaller-cap companies. Moreover, the Dow only tracks 30 stocks, while Nasdaq tracks over 3,400.

And while the Dow may be regarded as general gauge of the overall economy, the Nasdaq Composite is typically considered an authority on how the tech industry is doing.