How do you measure a chicken’s happiness? Is it in the way it runs for food? How much time it spends preening?

To size up what might make chickens happy in their brief lives, researchers at the University of Guelph in Ontario, Canada, are putting 16 breeds through physical fitness and behavioral tests.

They’re watching how well birds scramble over a barrier for food, how skittish they seem and whether they play with a fake worm.

Chickens can’t say how they feel, but playing with a fake worm may be a sign of happiness. 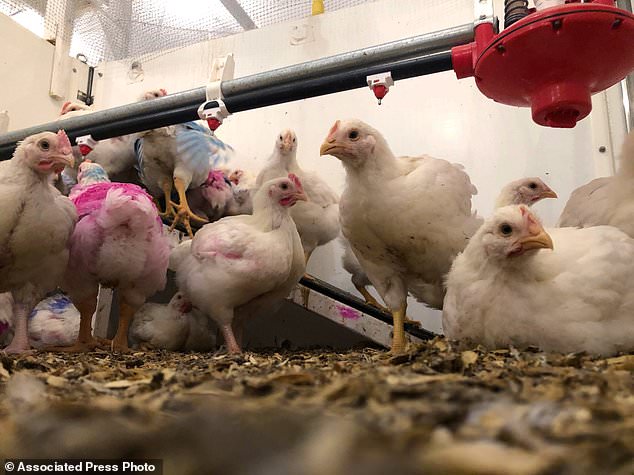 How do you measure a chicken’s happiness? Is it in the way it runs for food? How much time it spends preening? Researchers are tracking chicken traits like weight, growth rate and meat quality they hope will be useful to the poultry industry

‘We have to infer when an animal is happy or content or experiencing pleasure based on their behavior,’ said Stephanie Torrey, one of the researchers.

In recent years, the animal welfare world has moved beyond looking at how to minimize suffering to exploring whether animals can also enjoy their lives, Torrey said.

Such measures may be considered irrelevant by companies but underscore a broader lack of consensus around the welfare of chickens, which are sometimes slaughtered as soon as five weeks after hatching.

Animal welfare advocates say cruelty begins with birds that have been bred to have breasts so big they can barely walk.

They say today’s chickens are genetic monstrosities crippled by pain and that the industry needs to switch breeds.

Many in the industry say there’s no problem and that chickens may not move around a lot because they’re sedentary.

Even if they were to agree to change breeds, it’s not clear what the alternatives should look like.

The two sides disagree about the cause and frequency of health issues among broilers chickens.

Tyson and Sanderson Farms, for example, acknowledge that chicken breasts have ballooned over the years, but they say they’re not seeing widespread problems as a result.

‘If they can’t move and get to the feed trough, they’re not going to survive,’ said Mike Cockrell, chief financial officer for Sanderson Farms. 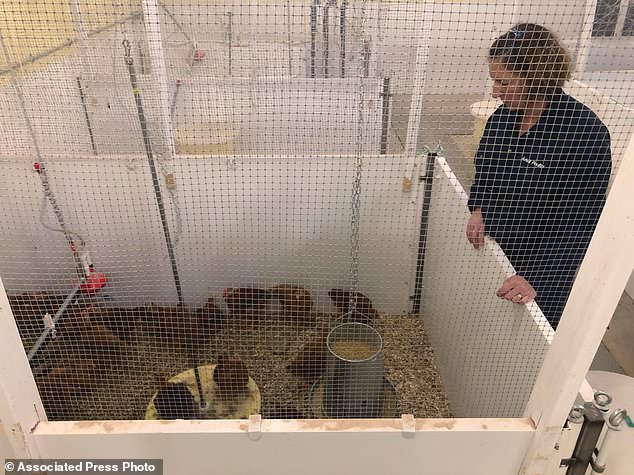 To size up what might make chickens happy in their brief lives, researchers at the University of Guelph in Ontario, Canada, are putting 16 breeds through physical fitness and behavioral tests

John Glisson of the U.S. Poultry and Egg Association says broiler chickens are ‘couch potatoes’ and that some people may mistake the birds’ laziness for a medical issue.

He said trying to assess welfare is tricky beyond established industry measures, like whether a chicken dies from disease before it’s slaughtered.

The industry says changing breeds is unnecessary, and that switching to broiler chickens that don’t grow as big or as fast would mean using up more water and other resources.

Chicken prices at the supermarket would be higher too.

Tyson recently ran a trial that let chickens pick from pens with varying levels of light to determine which they prefer.

Perdue is testing giving its conventional birds as much light and space as its organic birds, which are the same breed.

The Humane Society of the United States says stepping up living conditions helps, but it believes the bigger problem is breeding that has resulted in disfigured chickens.

It says chickens have been genetically manipulated to have massive breasts their legs cannot support.

WHAT IS THE CARBON FOOTPRINT OF SANDWICHES?

The overall annual consumption of sandwiches across the UK has the same environmental impact as the use of around eight million cars a year, scientists have claimed.

Researchers arrived at the figure after studying the carbon footprint of different types of sandwiches – both home-made and pre-packaged.

The team from the University of Manchester calculated the carbon dioxide equivalent (CO2 eq) – a standard unit for measuring carbon footprints – for the snacks.

Their calculation was based on British Sandwich Association (BSA) figures that 11.5 billion sandwiches are eaten each year in the UK.

This shows the total carbon footprint (grams of CO2 per sandwich) of 24 shop-bought sandwiches.

‘It is crazy for anyone to have to remind the industry that birds naturally walk,’ said Josh Balk, the Humane Society’s vice president of farm animal protection.

Balk said the study in Canada will provide important information on what type of chickens might suffer less.

University of Guelph researchers are also tracking chicken traits like weight, growth rate and meat quality they hope will be useful to the industry.

Aviagen and Tyson-owned Cobb, which supply breeds to chicken producers, are providing birds for the study, including breeds that are widely used.

The companies say they already track health and welfare, but that they’re interested in the research.

The Guelph study is being funded by the Global Animal Partnership, which certifies corporate animal welfare standards.

In 2016, it launched a campaign to get companies to switch to ‘slower growing’ breeds.

Since then, it has acknowledged that chicken welfare is more complicated than just growth rate. 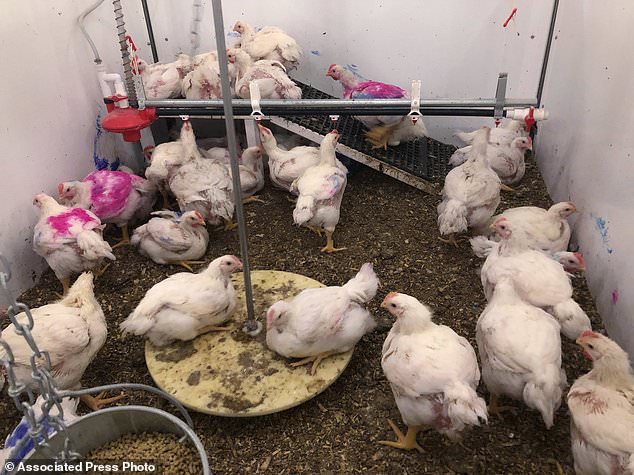 In recent years, the animal welfare world has moved beyond looking at how to minimize suffering to exploring whether animals can also enjoy their lives. Chickens can’t say how they feel, but playing with a fake worm may be a sign of happiness

It’s now pushing for a ‘better’ chicken, and hopes the study will help define what that entails.

Only a small percentage of chickens in the U.S. are GAP-certified, and spelling out new requirements for breeds risks making certification even rarer.

Anne Malleau, the group’s executive director, notes some of the researchers’ tests may seem far out.

But she said providing ‘enrichments’ – such as places where chickens can rest or perch – was also seen as a fringe idea before becoming more accepted.

GAP was founded a decade ago with funding from Whole Foods, which still pays Malleau’s and another staffer’s salaries.

Back in Guelph, researchers note that chicken traits can make for marketable imagery. That includes behaviors like their willingness to engage with a fake worm – which they note may be misinterpreted as ‘playing’ and happiness.

‘The jury’s still out whether domestic chickens, with their comparatively smaller brains, have the capacity to play,’ Torrey said.

CWRU hopes a local company is on the road to producing a safer, faster street-painting system – Crain’s Cleveland Business

How to do keto on Thanksgiving without losing your mind

'Always have a Plan B, it may be better than your Plan A'

How to switch your smartphone from iPhone to Android – Gearbrain

Woolly mammoths went extinct because of weak bones, study into a 16200 year old...