What will arise from the demise of mass commuting?


Before the pandemic, a friend who lives in a southern English village used to commute into London. He’d leave home at 7.45am and return at 9pm, grumpy and shattered. He rarely saw his children, let alone his neighbours.

Now he works remotely from his garden shed, takes the kids to school and has used a chunk of his new spare time to become supremo of his village cricket club. He’s forever popping to the field to take the covers off the pitch or get the pavilion roof fixed. He has gone from commuter to pillar of the community.

He isn’t alone. In the former commuter belts of big cities, remote work is now creating community. Is this a net gain for humanity, or is it outweighed by downsides elsewhere?

Commuting worsened the decay of civic life, observed political scientist Robert Putnam in Bowling Alone, his 2000 classic about the US. Ever fewer Americans knew their neighbours, worked as a volunteer or went bowling in clubs any more. This decay had many causes, but, said Putnam, “I was shocked to find how robust a predictor of social isolation commuting is. There’s a simple rule of thumb: every 10 minutes of commuting results in 10 per cent fewer social connections.”

American commuting times have worsened since Bowling Alone was first published, hitting a new high in 2019. This affected everybody, not just commuters. Before the pandemic, I met a friend from Orlando, Florida, whom I hadn’t seen in years. When I asked how life was, he grumbled about worsening traffic. At the time I thought this was a disappointingly mundane answer, but later I realised traffic ruled his life. Going anywhere took for ever, so he rarely went anywhere.

Civic life in Britain appears to have decayed too. The Office for National Statistics found fewer chats or exchanges of favours with neighbours, a weakening sense of local belonging and falling membership of “political, voluntary, professional or recreational organisations” in 2018 compared with 2012. 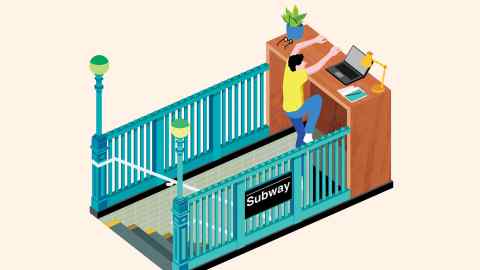 I’d seen this over the decades in the outer London neighbourhood where I finished school and where I still have family. At some point the church on the high street was converted into a pub. Once people stopped gathering in pubs too, the place became a bad chain restaurant.

I returned to the neighbourhood last month. The pandemic has transformed it into a 15-minute suburb, where all the necessities of life are a walk away. Many residents now work from home. Everyone was on the morning school run, chatting and exchanging favours and, afterwards, parents popped up in local coffee shops or at the lunchtime hot-yoga session.

Mock these new urban rituals all you like, but they are what constitutes 21st-century community. After a week there, I was waving to familiar faces on the street. It felt like the 1950s suburban idyll recalled by the Beatles in “Penny Lane”, with the barbershop where “all the people that come and go/Stop and say hello”.

One day I saw friends who had recently moved to another part of London. They had integrated fast, partly because their neighbours were around all day and partly because of their street’s WhatsApp group. Admittedly, it was full of boring stuff about bins, but then community often is boring. The WhatsApp group was so central to local life that they assumed it had been going for ever. In fact, like so many across Britain, it had started with the pandemic.

The revival of neighbourhoods has downsides. In some big cities, staying in one’s street will encourage segregation of like with like. Yet in the London region, that risk is mitigated by the sheer amount of residential mixing. Some of it is economic: my old neighbourhood has social housing and some lower-middle-class homeowners who bought before gentrification as well as bankers who are buying now.

There’s also ethnic mixing: in the babel of languages on the school run, I got to know a Parisienne in a hijab who talked of London as a non-racist paradise. At my friend’s cricket club, he has reintegrated several British Asians who had quit in a past, less-welcoming era.

Some people worry the neighbourhood revival will kill off city centres. But that won’t happen, longer term, in attractive cities. The suburbanites I met were already going into London a day or so a week, and they’ll go more often when nightlife and cultural venues revive. They love central London. Some would happily move there. They just don’t want to commute there every day. David Milder, an expert on downtowns, sees Central Business Districts giving way to “Central Social Districts”.

Tourists will eventually return too, and while some companies will abandon inner London, others around Britain and the world are itching to take over unwanted office spaces. Imagine Ricky Gervais’s fictional firm in The Office trading up from the Slough Trading Estate to a one-day-a-week meeting room off Piccadilly.

The neighbourhood revival will claim other victims. Charmless city centres and exurban business parks where people only ever went to work may die along with mass commuting.

Read More   'How do they expect to run without us?': Tesla accused of axing staff to cut costs