And yet, the company hadn’t turned a profit. It had negative free cash flow. And, it was valued at $37 billion.

That led my colleague Simon Erickson and I to make a bet — a public bet shared within the Twitter-sphere.

So I’ve made a friendly bet with my esteemed colleague @TMFStoffel.

The prize is a 6-pack of the winner’s choice.

Looking forward to seeing how this plays out. ?

I can’t emphasize this enough: Over the short term, I could just as easily have lost this bet. The bet itself spanned a measly six months. I am much more concerned with where things are headed over the next decade.

That said, Shopify has five traits that I look for in an investment. When all five are present, I really don’t care how expensive the stock is; I believe the scales are tipped in my favor. Let’s dig into all five. 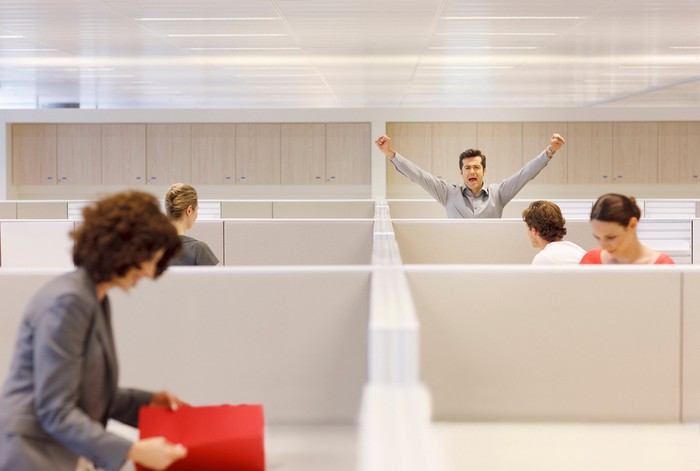 I’m an annoying stickler about mission statements. I need to know the existential reason a company exists in the first place. If it’s just to make money, I want nothing to do with it. And I’m just an investor — imagine how much more important that is to customers and employees!

From day one, Shopify’s mission has been very simple: “to make commerce better for everyone.” When we’ve interviewed founder/CEO Tobi Lutke, it’s clear this mission is in his bones.

His resolve in the mission has certainly been tested. When groups protested Shopify hosting a website with views that many found objectionable, Lutke agreed, but he refused to discontinue service, saying, “If we start blocking out voices, we would fall short of our goals as a company to make commerce better for everyone.”

Another part of that mission statement is that it’s optionable. That simply means there are endless ways Shopify can fulfill that mission. One look at the company’s history bears this out:

The point is: The world is going to change — as it always does. A company needs to be able to evolve, guided by its mission. Shopify has demonstrated an ability to do this. Over the long run, I don’t need to know what those changes will be; it’s enough to know that Shopify has proven it can evolve.

3. It must have a defensible moat

In the business world, success breeds competition. If a company doesn’t have some type of sustainable advantage, the competition will eventually catch up.

When those forces combine, they provide a wide moat, keeping merchants locked in for the long haul.

Of course, a company also needs to be able to pay the bills. Even if it’s mission-driven with optionality and a wide moat, those things won’t matter if it can’t pay the bills.

Shopify isn’t yet profitable or free-cash-flow-positive, but I think it has tons of financial fortitude. Currently, the company has $2 billion in cash and zero long-term debt.

Shopify is purposely spending a little bit more than it earns to both grab an enormous opportunity and manage investor expectations. That’s a smart move. And if a recession hits, it could easily hit the brakes on spending and be just fine.

Finally, I want to know that the people building this organization truly care about what they do. Being a founder-led company, Shopify already has a leg up. I’ve discovered that founder-leaders often view a company as a kind of extension of themselves, which makes them devoted to building something of lasting value.

If that weren’t enough, consider the following:

When people care about what they’re building, have a financial stake in it, and enjoy being a part of it all, good things happen.

What this all means for investors

Does all of this mean you should run out and devote tons of money to Shopify? Hardly. Investing is a game best played by adding small amounts over time. That’s what I’ve done with my own Shopify stake.

Rather, these are lessons you can apply across the board. When a stock seems expensive, look deeper. If it shares these characteristics — and you have a truly long-term mentality — it’s worth considering buying it anyway.

10 stocks we like better than Shopify
When investing geniuses David and Tom Gardner have a stock tip, it can pay to listen. After all, the newsletter they have run for over a decade, Motley Fool Stock Advisor, has tripled the market.*

David and Tom just revealed what they believe are the ten best stocks for investors to buy right now… and Shopify wasn’t one of them! That’s right — they think these 10 stocks are even better buys.

Hiring a PR Agency: How to Choose the Right One for Your Needs

Understand the Harmful Effects of Social Media on Businesses

4 Benefits Of Hiring Nottingham Accountants For Your Business

5 Reasons Why Your Organization Needs IWMS?