How do you succeed as a retailer and thrill your shareholders when the High Street is in its worst crisis for a generation?

Answers appear to include hiring former Love Island contestants to model your dresses, allowing teenage boys to live out their battlefield fantasies, opening more stores against the industry trend and giving snacks a 21st-century makeover.

At least these are among the methods that Boohoo, Games Workshop, Next and Greggs respectively are using to thrive. 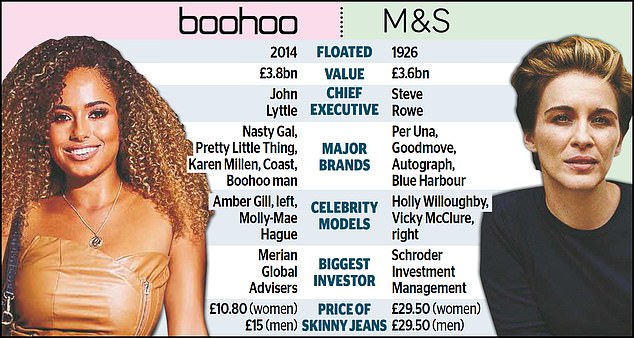 They have been rewarded with handsome share price increases by a stock market weary of household-name stores that have been slow to reinvent themselves.

Investors have been holding out for a retail hero. A pin-up has now emerged in the shape of Boohoo, wiping out the memory of former fashion darling Asos.

Boohoo is valued at £3.8 billion – remarkably, it has overtaken Marks & Spencer at £3.6 billion – a result of the 16-24 demographic’s love of a low-cut, low-priced dress, promoted by a reality TV star. In the final quarter of 2019 Boohoo’s sales rose by 44 per cent. Its shares, tipped for 2019 by Daily Mail ‘Wise Man’ Richard Stone of the Share Centre, are 78 per cent higher than a year ago at 328p. Readers who followed his tip would have been well rewarded.

Games Workshop, best known for its Warhammer board game, relies on a different kind of star: fictional characters such as the Grey Knights who feature in video games and are available in figurine-form which the youthful clientele can paint. Sales leapt by 44 per cent in the six months to December and the shares have advanced by 113 per cent to 7005p.

As for Next, its typical customer is a bit more mature. In fact, she may have a son who buys Warhammer figurines online and a daughter who adores Boohoo. But while she, too, favours online shopping at Next’s slick website, she also likes to collect these purchases from a branch – which is why the company is adding stores. Next’s market capitalisation is £9.15 billion thanks to a 47 per cent surge in its share price over the past 12 months to 6938p.

A taste for a Greggs’ lunch unites the generations and, increasingly, the social classes thanks to its vegan sausage roll and steak bake. Greggs’ market value is £2.5 billion, and shares are 60 per cent higher than a year ago at 2424p.

The performance of these companies is in marked contrast to woe elsewhere in the retail sector. Greggs’ staff are to receive a bonus this year. John Lewis workers may not be so lucky. Skinny jeans may be a uniform for Boohoo’s customers – but they were less of a hit last year at Marks & Spencer.

Retail is not dead, but it is changing dramatically. Some property investors are betting that the sector will adapt and thrive. But where should small investors look if they want a bit of retail therapy?

Are the likes of Boohoo, Games Workshop, Next and Greggs now too expensive? Is it too late to jump on board? Might Marks & Spencer, which has teamed up with Ocado for online food delivery, finally delight this year?

Anyone looking at the sector should first be aware of the difficulties facing all retailers, whether leaders or laggards.

As the change in fortunes at Asos illustrates (the shares, now 3190p, climbed to 6152p and went as low as 2033p) management must be ever-vigilant, constantly monitoring rivals and shifts in consumer behaviour. This is hugely testing if they decide to expand, particularly overseas.

It is also dangerous to assume that consumers, who have been more cautious because of stagnant incomes and uncertainty over Brexit, will return to their free-spending ways.

Sophie Lund-Yates, equity analyst at Hargreaves Lansdown, says: ‘There is some worry that the caution about spending may be turning into a permanent mindset.’

Richard Hunter, head of markets at Interactive Investor, also considers Next to be in the higher risk category, arguing the company will find it difficult to continue to produce the kind of growth that surprises the market.

He argues, however, that Boohoo, Games Workshop and Greggs have been overlooked by most analysts, which means that there is potential for further up-rating of the shares. There is even talk that Boohoo could be a candidate for the FTSE 100, from which M&S was ousted in 2019.

Whether or not this turns out to be true, it still speaks volumes about the revolution in retailing.

Companies’ silence on virus is storing up problems

Five charts from a rough week in markets

Utilities no place to hide in this week's stock market rout

Inside the most popular homes for first-time buyers where you only need a 5%...

‘Old tech’ shows it still has bite for investors

Automation is the future of futures markets