Cryptocurrency markets are on the move again: Category giant bitcoin has seen its tokens gain 40% in value in 2020 alone, and 155% over the last 52 weeks. If bitcoin was a stock, the “company” would be worth roughly $185 billion today. That market cap would land it right between aerospace titan Boeing and software giant Adobe as one of the 40 most valuable companies on the U.S. stock market.

Bitcoin’s founders and supporters see it as “a new kind of money.” As such, market watchers on both the bull and bear sides of the cryptocurrency debate often argue that the tokens — currently trading in the neighborhood of $9,700 each — will either skyrocket in value to at least $1 million, or bitcoin will collapse and die. There is no middle ground.

If bitcoin achieves a large enough scale and a wide enough acceptance to become a viable alternative to gold, silver, or national currencies as a value store, the cryptocurrency will have a bright future. If not, it’s supposedly heading to zero in the end. The same goes for many other cryptocurrencies, and hundreds of them have already crashed and burned. 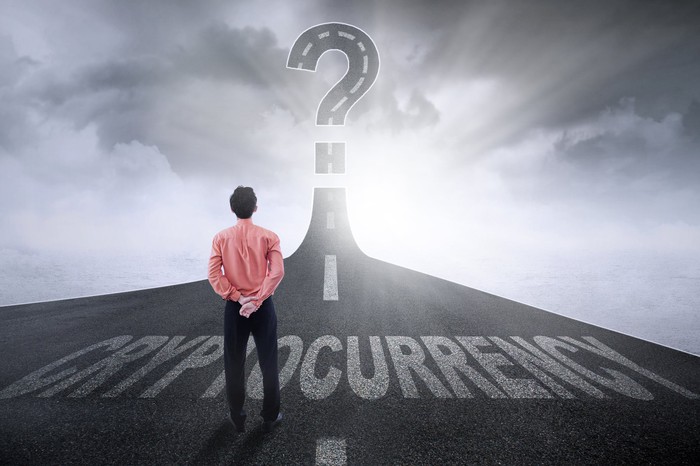 So how big is the total cryptocurrency market as a value store today? Surprisingly small, actually: 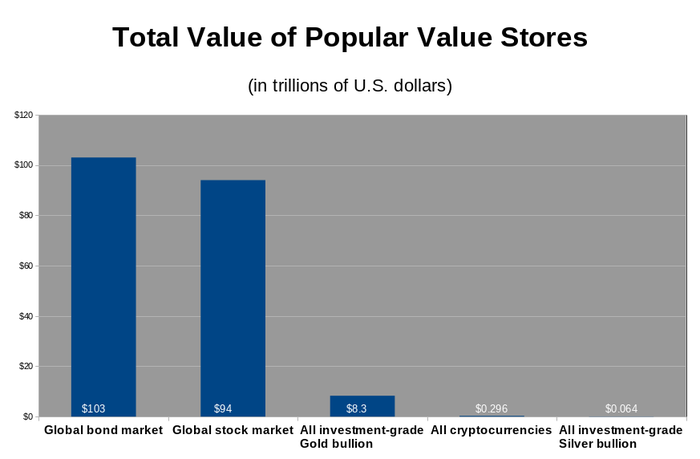 The stock and bond markets make the others look tiny. Let’s zoom in on the precious metals and cryptocurrencies alone: 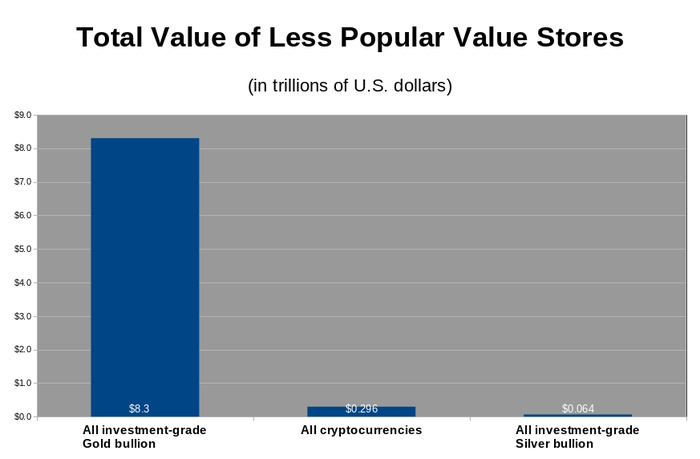 Yeah, it’s still difficult to see bitcoin and its crypto-peers next to the mountain of gold. I was surprised to see the relative lack of value in silver, but while modern mining companies extract more than 10 times as much silver every year than gold, ounce for ounce, gold is close to 90 times more valuable. And less than 5% of all the silver ever mined is in an investable form today — coins or bullion. The rest has been used for jewelry, decoration, or by industry — and a fair share of it has essentially been lost. You learn something new every day.

So where does this leave the cryptocurrency discussion? Well, neither bitcoin nor the crypto market as a whole stand anywhere near the multitrillion-dollar value levels of gold, bonds, and stocks. Investors looking for stable assets would clearly be better served to put their money into any of the three larger asset classes, not to mention alternatives such as real estate or owning your own business.

On the flip side, let’s imagine a future where bitcoin (or some better-designed cryptocurrency) becomes a viable alternative to owning gold and reaches a similar market scale. If it’s bitcoin, that would require its value to increase at least 40-fold from current levels. We’re not likely to see a surge like that in a single upward run; bitcoin only multiplied 21-fold during its historic price run of 2017, and the volatility of investments tends to fall as the assets grow larger.

But many investors/speculators/visionaries/gamblers (pick your preferred epithet) are betting on that bullish outcome in this all-or-nothing asset class. Over a recent 24-hour period, $46 billion of bitcoin tokens changed hands, or 25% of the entire currency. That’s huge next to the average daily dollar volumes of trading in Adobe ($734 million) or scandal-stricken Boeing ($2.15 billion). It’s even enormous in comparison to trillion-dollar market behemoth Apple, whose average dollar volume clocks in at $8.8 billion.

It takes a lot of traders to move that much bitcoin in a single day, including plenty of deep-pocketed market makers. Bitcoin’s trading volumes have never been this overheated, not even at the peak of 2017’s crypto-mania, when daily trading topped out near $23 billion.

I wouldn’t be surprised to see bitcoin and friends making a big move soon as the higher trading pressure either becomes the new normal or pops and drops. Whether the cryptocurrency market rises or falls, I’m content to simply hold on to my tiny crypto portfolio, which consists of a $20 “let’s try this” whim from six years ago.

10 stocks we like better than Boeing
When investing geniuses David and Tom Gardner have a stock tip, it can pay to listen. After all, the newsletter they have run for over a decade, Motley Fool Stock Advisor, has tripled the market.*

David and Tom just revealed what they believe are the ten best stocks for investors to buy right now… and Boeing wasn’t one of them! That’s right — they think these 10 stocks are even better buys.

Why Stablecoins Are Booming During the COVID-19 Pandemic – NullTX