Will PCR tests for an amber list holiday really cost my family £1,000?


I booked a holiday to Portugal at the end of August, when it was placed on the green list, but it has now been moved to amber and I am not sure whether to cancel while I still can do that for free, or wait to see if things change again and I can go.

One of the things putting me off is that although I would be happy to quarantine on return and do a test for early release, when I looked into the rules it seemed as if I would have to do a minimum of three UK PCR tests.

All tests have to be paid for at high prices and can’t be free NHS tests.

It seems like this would add around £1,000 to the cost of our family of four’s holiday in PCR tests alone. 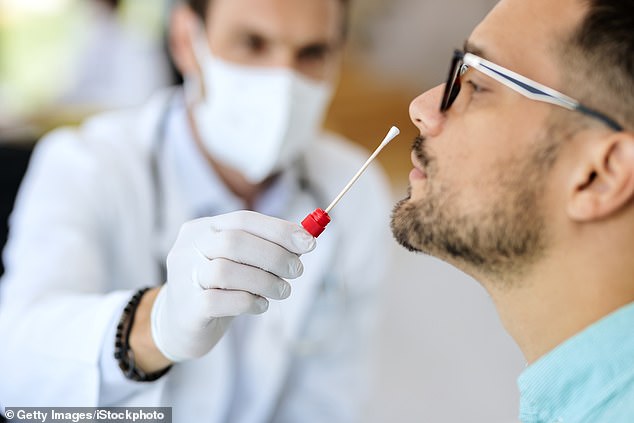 PCR tests are needed multiple times when travelling abroad, which could cost hundreds

What exactly are the rules about how many tests I would have to take and where they need to be done on which days?

Why when we have a mass free testing programme do people have to pay hundreds of pounds to private companies for tests, of which many don’t seem to be getting good reviews? SL

Grace Gausden, This is Money, replies: One thing that many of those considering travelling in the near future need to take into account is the high cost of PCR tests.

Currently, these tests are needed in varying degrees for those heading abroad, whether to a green, amber or red list country, to ensure they are coronavirus-free.

The tests differ to the lateral flow ones, which are completed by putting a swab up the nose with results able to produced in 30 minutes.

The PCR tests instead swab both the mouth and the nose and results can take hours, if not days, to be returned and are generally considered more accurate.

Many countries require a PCR or antigen test before leaving the UK, plus on return to the UK, you will need:

Pre-departure PCR test before flight to the UK plus a Day 2 test and Day 8 test. To avoid ten day quarantine, you must also do a Day 5 Test to Release

Children over 4 must do tests.

Travellers are unable to get a free PCR test from the NHS – despite people being able to request one quickly and without cost when in the UK.

PCRs range in price, with some starting at around £30 but others costing up to £200, depending on supplier. And with travellers needing to take multiple tests, this means the cost of a holiday can surge dramatically.

Whilst other countries also have testing, the cost of PCR testing for international travel in the UK is double that of testing in other European countries, according to data from ABTA.

It found that, on average, a UK pre-departure PCR test costs £128 per person, while the average pre-departure test cost across eight key destinations only comes to just under £62 – less than half the UK price level for a similar PCR test.

Some countries offer free testing for travellers, but the UK doesn’t despite having some of the highest testing capacity in Europe.

In fact, individuals travelling from the UK to a European destination would pay an average of £306 for testing.

This is because, in most cases, they will need a UK pre-departure test, followed by a pre-departure test in their destination country on their return at the end of their holiday, and two post-arrival tests in the UK. 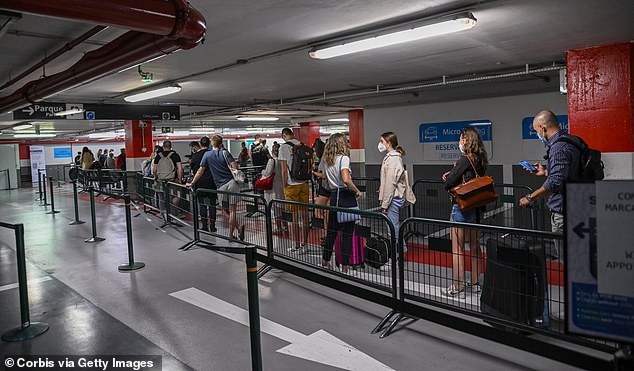 Take the example, of mainland Portugal, currently all travellers from the UK over the age of 2 must take a PCR or rapid antigen test prior to departure for the country.

On return, they must do a pre-departure test in Portugal, a test on day two when back in the UK, and then another on day eight. That’s if they quarantine for ten days when they get back to the UK.

There is also an option to take another test on day five through the Test for Release scheme for those who have been to an amber list country, such as Portugal and want early release – meaning you quarantine for five days instead of ten. The day eight test must still be taken.

Only children under 4 are exempt from day two and eight tests.

The gov.uk website adds for arriving in Portugal: ‘If you have recovered from COVID-19 in the last 90 days, or have had both doses of the vaccine at least 15 days prior to travel, you will be exempt from showing a RT-PCR test on entry.’

That waiver does not currently apply on return to the UK, although there is talk that the Government may bring this in for amber list countries.

We found a company offering PCR travel packages with an Algarve Return option, which includes pre-departure tests in the UK and Portugal and Day 2 and 8 tests on return. It costs £189. For a family of four that would be £756. Test to Release on Day 5 kits would be £48 each, adding a further £192, to deliver a total cost of £948.

Ultimately, this means holidaymakers looking to go abroad with their families face paying almost £1,000 or more, depending on provider, for tests alone, on top of their flights and accommodation.

Experts in the industry – and airlines – are calling on the Government to make testing free, particularly as the capacity exists.

Gatwick Airport said it recognises the cost of tests is an issue and have arranged for its own airport subsidised, fast and accurate lab-analysed PCR swab test provider to have both drive through and walk in facilities on the airport campus.

A Gatwick spokesperson replies: It is in all our interests to ensure we only take forward steps out of the pandemic and, given the extra time the recent delay to the lifting of lockdown allows, we urge the Government to use the time to put a simple, effective and internationally coordinated system in place so that those who have been double vaccinated can travel abroad without the need for expensive tests.

A Heathrow spokesperson replies: We agree that more needs to be done in reducing the cost of testing to ensure travel doesn’t become cost prohibitive for millions of hard working people.

For starters, Ministers need to end testing VAT and take advantage of the UK’s vaccine rollout by ending testing and self-isolation requirements for vaccinated passengers from low-risk areas.

Many of our key trading partners and competitors are already utilising the power of vaccines, and further delay will only see the UK left further behind.

Mark Tanzer, Chief Executive of ABTA, replies: The restart of international travel needs to be affordable and accessible for everyone – so that people can take their much-needed overseas holidays and visit the family and friends abroad whom they’ve not been able to see for such a long time.

Travel to the lower risk, green categorised countries should be as unrestricted as possible.

The requirement for a PCR test when you arrive back from a green list country could prove a cost-barrier for many people – we welcome the fact that the Government commits to engaging with industry on this issue.

Small changes, like requiring a PCR test only if the individual gets a positive result from a lateral flow test, would make international travel more accessible and affordable whilst still providing an effective mitigation against re-importation of the virus.

The Government should also consider whether those who have been vaccinated can be exempt from testing requirements, should scientific evidence suggest reduced transmissibility. 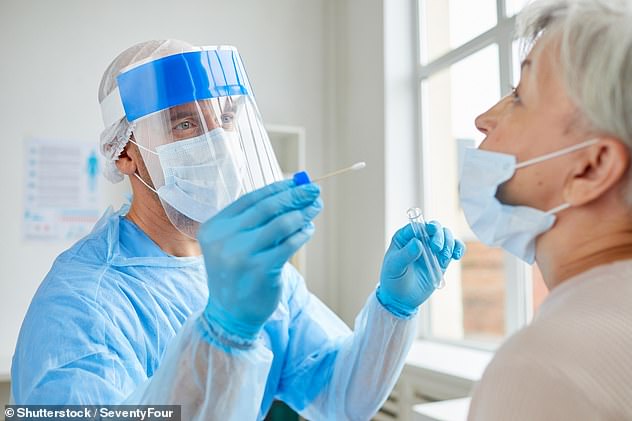 A Government spokesperson replies: NHS Test and Trace delivers tests for international arrivals, alongside other private providers who meet stringent testing standards, and charges at the mid-point of the market, to ensure private providers can also fairly compete.

This price is regularly reviewed and the cost of travel testing has fallen since the border controls were introduced. We continue to work with the travel industry, as well as private testing providers, to see how we can further reduce the cost, while ensuring travel is as safe as possible.

Grace Gausden, This is Money, adds: The Government added that NHS Test and Trace have reduced the cost of day 2 and 8 testing bundles by £40 from £210 to £170 with day 2 tests for green list arrivals to cost £88.

Options being considered include cheaper tests for use when holidaymakers return home, as well as whether the Government would be able to provide pre-departure tests.

However, another of the major issues with some PCR tests seems to be that the results are not delivered in time either for people to catch their flights, or to allow them to leave their 10 day quarantine when coming back from amber or red list locations.

When many are paying hundreds of pounds for the privilege, this has made them frustrated and wary of the system.

There also appears to be a disconnect, as sports fans heading to Wembley this month for Euro 2020 matches have been advised purely to show evidence of a negative lateral flow test, obtained freely through the NHS.

It advises any PCR tests paid for privately will not be accepted.

Some have taken to social media to vent their frustration at the cost of the tests and the late results they have received.

Another person said his wife had been waiting days for her PCR test, keeping her in quarantine 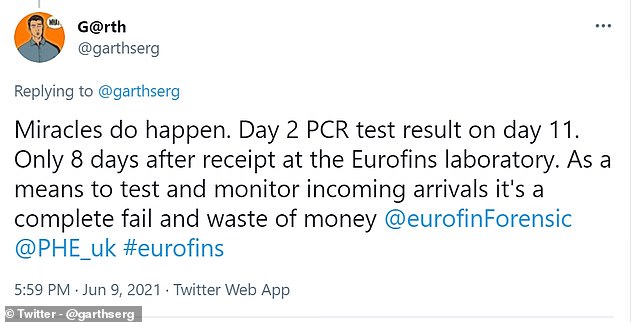