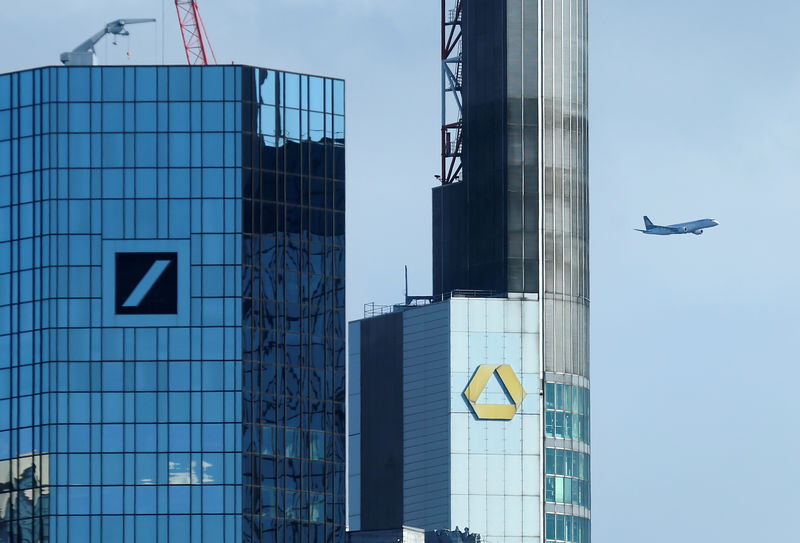 © Reuters. FILE PHOTO: Outside view of the Deutsche Bank and the Commerzbank headquarters in Frankfurt

BRUSSELS (Reuters) – Euro zone banking watchdogs said banks planning mergers should make sure they could be wound down in a crisis, a warning likely to resonate with executives seeking to merge German giants Deutsche Bank (DE:) and Commerzbank (DE:).

The two lenders confirmed on Sunday they are in tie-up talks following months of pressure from Berlin, which has pushed for a deal amid concerns about the health of Deutsche Bank.

The European Central Bank and the EU watchdog in charge of disposing of failing banks both said on Thursday that the two banks, as any other lenders planning a merger, should guarantee that the merged entity could be “resolvable” to avoid taxpayers having to pay for their bailout in a crisis..

“If a bank becomes too big, complex or interconnected… it needs to have additional capital,” the ECB top watchdog Andrea Enria said when asked in the European Parliament about a possible tie-up between Deutsche Bank and Commerzbank.

His comments were echoed by the Single Resolution Board (SRB), which is responsible for devising wind-down plans for the euro zone’s largest banks.

The agency said it did not comment on individual banks or mergers, but when asked about the planned tie-up between Deutsche Bank and Commerzbank it said in a statement: “We expect firms to have consideration of their resolvability when undertaking significant business model changes.”

“The SRB currently engages in resolution planning for both Commerzbank and Deutsche Bank as it does for all banks under its remit,” the agency said.

It added that when there is a “material change” in the operations of a bank, the SRB reviews its resolution strategy for the bank.

EU Says Johnson Will Be Blamed if Brexit Wrecks Trade with U.K.

Will my employee accuse me of discrimination for firing him? Ask HR

How I became Peloton's VP of Fitness Programming: Robin Arzon

We took 3 laundry myths to the cleaners: What's fact and what's fiction?

Google+ will shut down after a user data breach