By Tanya Jefferies for Thisismoney.co.uk

Investors in Neil Woodford’s stricken equity income fund will have to wait an extra 10 days to receive their first payouts, which are now due to start on 30 January.

They also face a delay in being told the amount they will get, from January 13 to around 28 January 2020.

The postponement is to ensure investors retain exposure to markets until the fund is wound up – still scheduled for mid-January – and to minimise the cost of liquidating money market holdings, according to the latest update from administrators. 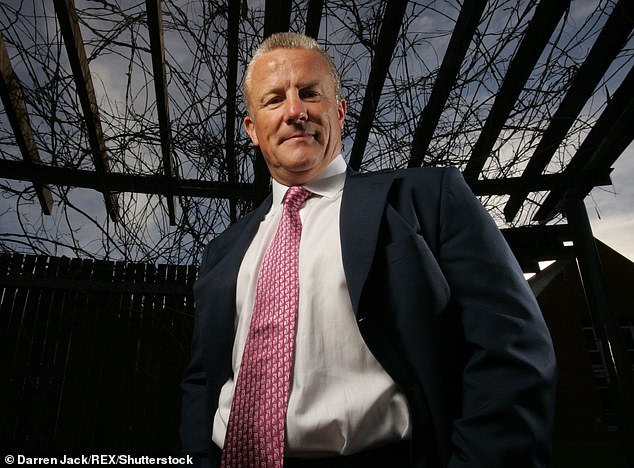 Investor backlash: There is widespread anger over Neil Woodford’s management of the equity income fund, and his decision to take some £8.6m in fees after its suspension in June

This also reveals the fund has lost 15 per cent since investors were locked in at the start of summer, versus a 9 per cent gain by the FTSE All Share during that time.

And although it is up 1 per cent since Woodford was ousted in October, this still lags the 6 per cent gain in the All Share.

Hundreds of thousands of investors face losses following the collapse of the fund, but are waiting to get some of their money back.

People who hold it on an investing platform or in a pension will be paid direct into their account or fund.

Administrators Link Asset Services say fund platforms might take a few extra days to process payments, after they are made on 30 January. The full timetable is below. 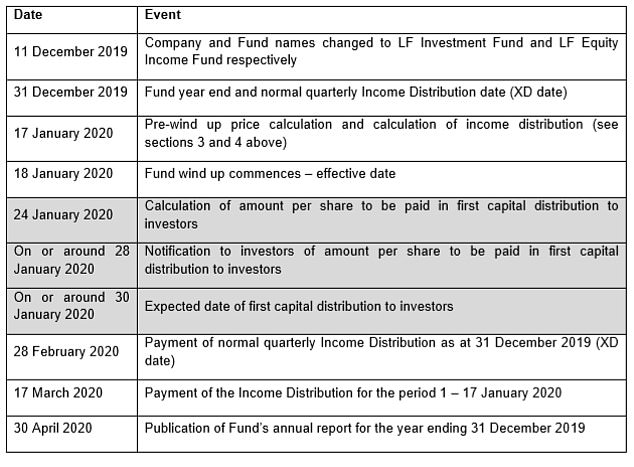 That relates only to the relatively liquid ‘A’ portion of the portfolio being run by US investment bank BlackRock.

The task of selling the much more illiquid assets is being handled by specialists at Park Hill, and today Link only said: ‘We continue to work with Park Hill to explore opportunities for the sale of assets within Portfolio B.’

Accounts for the 2017/18 year published earlier this week showed that Woodford and his business partner Craig Newman scooped £13.8million in dividends from their investment business while it was descending into crisis, with investors already fleeing funds.

That’s compared to the £36.5million that the pair took out of Woodford Investment Management in the 2017/18 year.

There is widespread anger over Woodford’s management of the equity income fund, and his decision to take some £8.6million in fees between its suspension in June and the decision to wind it up.

READ  MAGGIE PAGANO: Politicians should fight for our family firms

His smaller Woodford Income Focus fund has been taken over by Aberdeen Standard Investments, and Woodford Patient Capital Trust by Schroders Investment Management. 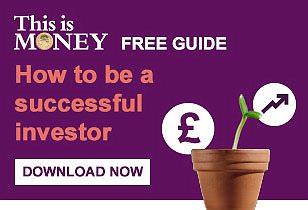 Woodford has reportedly travelled to China to drum up interest from investors in early stage businesses, in what is assumed to be an attempt to resurrect his career.

Ryan Hughes, head of active portfolios at AJ Bell, says: ‘Investors will be disappointed by the news that the initial payment will be delayed from the date given in the communication last month but ultimately it’s important the fund is wound up in the appropriate manner.

‘Link has provided a further update on how the liquidation is going and news that BlackRock has now sold down 90 per cent of their element is positive.

‘However, there remains little hint as to the progress that Park Hill are making with the illiquid element of the portfolio and this may be an indication that these disposals are proving to be challenging.

‘Given this represents around one third of the fund, investors should expect the liquidation process to continue for a considerable period.

‘Attention will now focus on the next communication on 28th January when investors will get their first indication of how much the initial payment will be.’

Ukraine and Russia sign deal on gas supply to Europe