Janet Yellen has said she is confident that Congress would approve a key pillar of the global corporate tax deal signed by 136 nations last week, as part of multitrillion dollar economic legislation being negotiated by the White House and Democratic lawmakers.

“I am confident that what we need to do to come into compliance with the minimum tax will be included in a reconciliation package,” the US Treasury secretary told ABC on Sunday. “I hope . . . that it will be passed and we will be able to reassure the world that the United States will do its part”.

Yellen’s remarks came after the OECD brokered a groundbreaking overhaul of global corporate tax rules, in a bid to wipe out tax havens while bringing in $150bn more a year from multinationals. 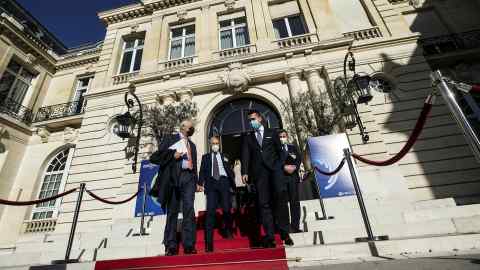 The agreement includes a 15 per cent global minimum effective corporate tax rate, plus new rules to force the world’s multinationals to declare profits and pay more in the countries where they do business.

But key provisions of the deal, including the 15 per cent global minimum tax, require congressional approval in the US. This approval has been called into question by feuding among Democrats over Biden’s domestic spending plans. The White House and Democratic leaders on Capitol Hill are hoping to secure an agreement on Biden’s spending plans and tax increases by the end of the month, but a deal is far from guaranteed.

On Sunday, Yellen said the “historic” global tax pact would “stop what’s been a decades-long race to the bottom on corporate taxation, where countries try to cut their taxes to attract our businesses, to make it harder to keep jobs in the United States”.

The Treasury secretary on Sunday said she believed Democrats would “come together and do what’s necessary” to pass the spending and tax legislation, which is opposed by Republicans and will need to pass both chambers of Congress with Democratic votes alone.

Biden and many Democrats had initially aimed for a $3.5tn spending package focused on expanding child care, education and healthcare investments. But because of resistance from moderate members of the party, they are talking about paring back the size of the bill to about $2tn over a decade.

“We do have a limit on the amount that we can spend and there are hard trade-offs that are going to have to be made,” Yellen said.


over a decade is the likely amount of the spending package focused on expanding child care, education and healthcare investments

Among them is the scope of benefit programmes. Universal schemes tend to be “long lasting and very popular”, Yellen said. “But there is also an argument for making sure that the highest income Americans perhaps don’t get the benefit of a programme that is most needed by those with lower income”.

The Treasury secretary also weighed in on the debt ceiling debate after the Senate last week voted to extend the debt limit until December 3, providing short-term relief to investors and executives who feared a government default as soon as this month.

Yellen said she was confident Nancy Pelosi, the Democratic speaker of the House of Representatives, and Chuck Schumer, the Senate’s top Democrat, would be able to resolve the matter before the December deadline.

It would otherwise be “a self-manufactured crisis that affects our economy at a time when we’re recovering from the [Covid-19] pandemic,” she said. “A failure to raise the debt ceiling would probably cause a recession and could even result in a financial crisis.”

Yellen renewed her call to eliminate the debt ceiling altogether. “We should be debating the government’s fiscal policy when we decide on those expenditures and taxes, not when the credit card bill comes due”.