Over the past two days girls in the region have had the opportunity to learn more about science, technology, and the trades.

It’s part of an effort by Durham College to get more women into fields that have been dominated by men.


Clair Hughes, 13, isn’t afraid of getting her hands dirty.

“I like the feeling of using power tools,” said Hughes.

Hughes may only be in Grade 8 but she already knows the trades are for her — and more importantly, she knows she wants to become a civil engineering tech.

“I grew up with a lot of boys in the house so I’m used to boys around me, so I feel that’s easier for girls and plus we get a lot more opportunities that we don’t usually get to have,” said Hughes.

Hughes was one of a number of girls in Grade 7 and 8 from around the region who attended the Young Women in Science, Technology and Trades Conference at Durham College. 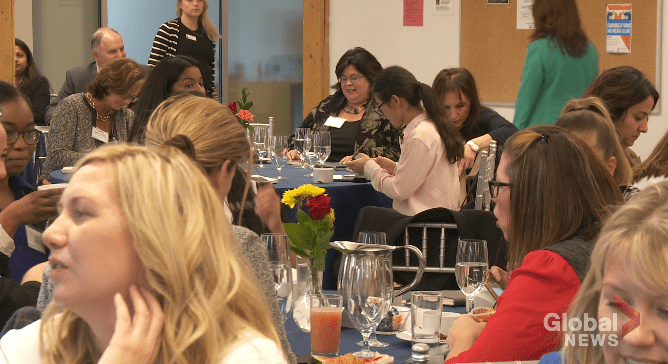 Kate Campbell has spent the past 14 years as a contractor. She found her passion just a couple years after graduating from high school and spoke to the students Wednesday.

“Unfortunately, women only represent four per cent of the skilled trades industry,” Campbell said, “so I really do feel like I need to speak out about how important it is for women to know they can do it and that the skilled trades are for everyone and it’s not all about heavy lifting and dirty jobs.”

READ  The race to replace Viagra

The students are now at the age where they’re starting to figure out what career paths they want to take.

“There is that stigma still involved with the skilled trades that university is the pathway to success and that a skilled trade is secondary,” Campbell said.

“So I really do feel we need to talk about them on equal playing fields and you can be successful on either path.”

The trades weren’t something Samantha D’Souza was interested in but, the conference has opened her eyes to a potential career path.

“I think it’s really interesting to learn about stuff like this that can give you a tonne of opportunities when you’re older,” said D’Souza, Grade 8 student.

This is the second year Durham College has hosted the two-day event, and Durham College executive dean and principal Rebecca Milburn hopes it will help showcase a potential opportunity that fosters growth.

“All skilled trades are in demand, you make a good living, you can do the job,” said Milburn.

“It doesn’t matter if you don’t think you’re big enough or strong enough, the jobs are there.”

NASA calls off SpaceX launch over lightning risk to astronauts