Zantac is pulled from shelves in the UK


The manufacturer of common heartburn drug Zantac has recalled several batches over fears they could contain a cancer-causing chemical.

GlaxoSmithKline announced four different types of the medication, all only available on prescription, would be recalled.

Over-the-counter Zantac products, which people can buy without a prescription, are made by a different pharmaceutical firm and are not affected by the recall.

It is feared some pills may contain traces of NDMA, or N-nitrosodimethylamine – considered to be ‘probably carcinogenic’ to humans. 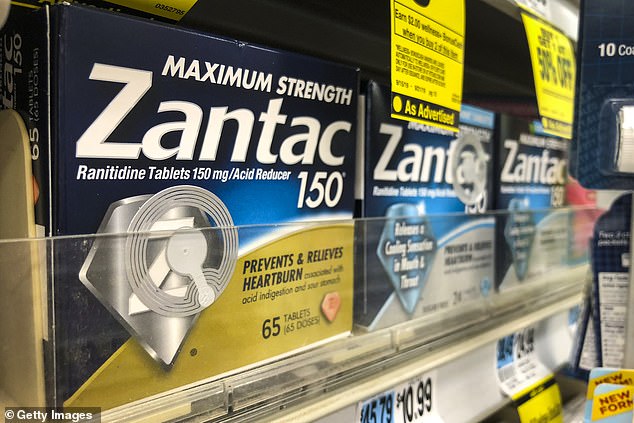 After the FDA discovered trace amounts of a carcinogen in Zantac’s active ingredient, ranitidine, CVS said Saturday it would suspend sales of the popular heartburn drugs (file)

The Medicines and Healthcare products Regulatory Agency (MHRA), which polices the safety of drugs in the UK, issued the alert.

But it said patients should keep taking their medication unless told otherwise by their doctor.

All four are produced by GlaxoSmithKline and are only available via a prescription. It is thought that some pills were contaminated with traces of NDMA during the manufacturing process.

Omega Pharma, based in Ireland and the US, and are not affected by this recall, the MHRA said.

The MHRA said that it is still investigating the safety of other medicines containing ranitidine.

‘Patients should keep taking their current medicines but should speak to their doctor or pharmacist if they are concerned and should seek their doctor’s advice before stopping any prescribed medicines.

READ  Coronavirus symptoms: An inability to do this is an emergency warning sign

‘We have asked companies to quarantine batches of potentially affected medicines whilst we investigate and we will take action as necessary, including product recalls where appropriate.

‘We have also requested risk assessments from the relevant companies which will include the testing of potentially affected batches.

‘Currently, there is no evidence that medicines containing nitrosamines have caused any harm to patients, but the Agency is closely monitoring the situation, and working with other Regulatory Agencies around world.’

Health authorities in Hong Kong pulled the exact same four products on September 24 over fears they contained the potentially-carcinogenic chemical.

WHAT ARE THE ZANTAC PRODUCTS THAT HAVE BEEN RECALLED?

GlaxoSmithKline has announced a UK-wide recall of four prescription-only types of Zantac, a common heartburn drug.

It is feared some pills may contain traces of NDMA, or N-nitrosodimethylamine – considered to be ‘probably carcinogenic’ to humans.

The affected products are:

Over-the-counter versions of Zantac (75 Relief and 75 Tablets) are not affected by the recall. They are produced by a different company.

The Irish equivalent to the MHRA – the Health Products Regulatory Authority – said the fault comes from the manufacturing plant in India.

US retailer CVS recalled Zantac, as well as some generic versions of the medication, after officials found some pills contained traces of NDMA.

MailOnline has asked why it has taken GlaxoSmithKline weeks to pull the potentially-dangerous drugs from UK shelves.

READ  US scientists have completed a coronavirus vaccine

Online pharmacy Valisure first discovered the link between Zantac and its generics to NDMA in June.

It filed a detailed petition to the The Food and Drug Administration (FDA) asking the agency to recall all products containing ranitidine.

Valisure’s research found that NDMA was the result of the ‘inherent instability’ of the ranitidine molecule.

It claims that even generic versions of the drug are affected and could generate very high levels of NDMA in the human body.

The FDA issued a warning on the back of the petition on September 13 which sparked an investigation into ranitidine by The European Medicines Agency.

Zantac is not the first medication to be recalled in the UK over fears it could contain NDMA.

The MHRA has pulled a series of heart drugs in the last year after tests revealed some batches contained NDMA or a similar chemical.

Several medical studies have linked NDMA to colorectal, stomach, liver and kidney cancers in animals. Evidence on humans is scarce.

An MHRA spokesperson said at the time it was ‘monitoring the issue’ and would take ‘appropriate action if necessary’.

When asked by MailOnline last month, the body added it had not yet initiated any product recalls – unlike its Irish counterpart.

REVEALED, HOW THE ZANTAC SCANDAL UNFOLDED

SEPTEMBER 13 – The FDA confirms some batches of ranitidine pills, including Zantac, contain trace amounts of NDMA

Valisure asks the FDA to recall all products containing ranitidine. It says the impurity was the result of the ‘inherent instability’ of the ranitidine molecule, claiming every ranitidine-based drug could be affected

SEPTEMBER 23 – The Irish equivalent to the MHRA – the Health Products Regulatory Authority – recalls 13 medications containing ranitidine, including seven versions of Zantac. It says the fault comes from the manufacturing plant of the chemical in India

Sandoz recalls its generic version of ranitidine in the US

SEPTEMBER 24 & 25 – GlaxoSmithKline recalls four different types of Zantac in Hong Kong. The next day, it pulls the drug in India, where it is branded as Zinetac. It also halts global distribution of the popular medicine

SEPTEMBER 28 – US retailer CVS removes Zantac and its own generic ranitidine products from 6,200 of its stores over NDMA fears

Coronavirus: Why can I shop but not visit my relatives?

Gross video shows how easily germs spread on the Tube

Sally Daghlian: 'Some migrants are too scared to seek healthcare'

Is Britain REALLY the sick man of Europe?

Heart attack symptoms: The sign on your eyelids that could signal you are at risk